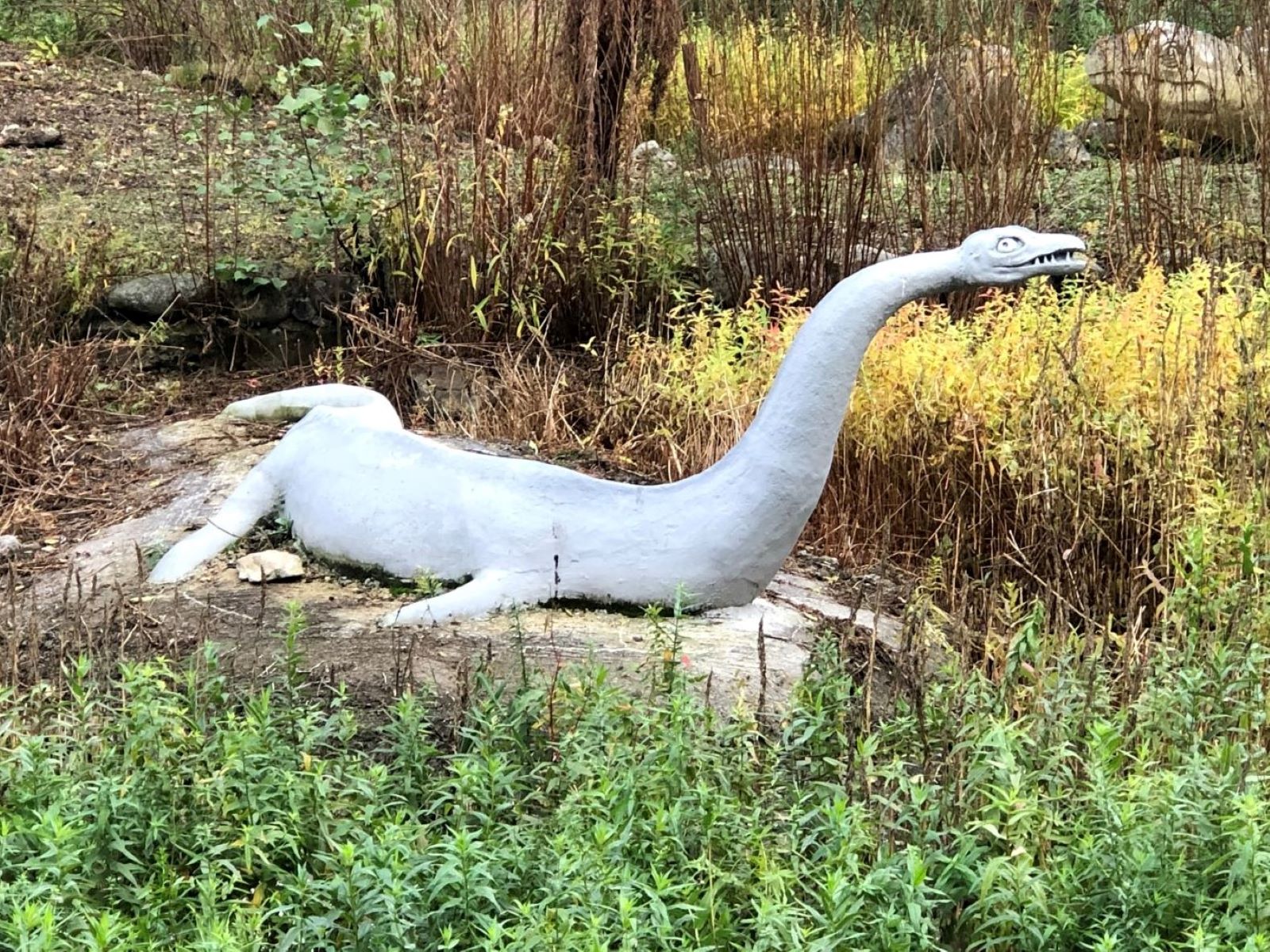 It was given this name by the scientists William Conybeare and Henry de la Beche to indicate that it was more like a normal reptile than Ichthyosaurus, which had been found in the same fossil bed a few years earlier.

Common name: Members of the same group are generally referred to as plesiosaurs

Size: Around 3.5 metres long, though other types of plesiosaur grew much bigger

Diet: They would have probably eaten a range of fish, squid, molluscs and other sea creatures. Although the models look sedate, they were actually ferocious predators, with their paddle-shaped limbs helping power them through the water.

Statues: Three different species of plesiosaur are represented in the water scattered in front of the large marine reptile island.

Fun fact: The first complete skeleton of Plesiosaurus was discovered by the fossil hunter Mary Anning on the Jurassic coast in Dorset. Experts thought its long neck looked so unlikely they thought it was a fake.

The Crystal Palace statues vs modern scientific reconstructions: In the mid nineteenth century there were relatively complete skeletons of plesiosaurs so they were constructed in a generally credible light by today’s standards.

A noteworthy detail is the varying proportions of the three restored species: “Plesiosaurus” macrocephalus (meaning ‘large head’, located on the far left facing away from the island towards the bank); Plesiosaurus dolichodeirus (meaning ‘long-necked’, located in the middle facing towards the island); and Thalassiodracon hawkinsi (named after the fossil collector Thomas Hawkins, located on the far right).

Though the proportions are not exact to fossil data, they capture the main characteristics of each species. “P”. macrocephalus is especially realistic with its robust, deep tail and powerful-looking shoulders. These attributes perhaps make it the most ‘modern looking’ of all three sculptures. Additional fine details include the eyes being angled upwards, and the obvious teeth reflects a suggestion that they were permanently visible.

Our understanding of plesiosaur facial tissues is less clear, but it’s not unreasonable to assume liplessness, or at least lipless regions. The presence of smooth skin does not entirely align with what we know of their anatomy, but it’s not a bad inference given that their scales were actually tiny – literally millimetres across. It’s difficult to imagine how the materials available to their sculptor (Benjamin Waterhouse Hawkins) and his team could have been crafted to show such fine detail even if such data was available to them.

There are several major differences between the Crystal Palace models and modern interpretations. The most obvious of these is their thin, highly flexed necks, which recall those of long-necked birds or snakes. Today, we assume plesiosaurians were capable of a reasonable degree of neck flexion, but perhaps only to the extent of forming broad arcs, not multiple tight curves.

The Crystal Palace models, in particular Plesiosaurus dolichodeirus and Thalassiodracon hawkinsi, also have slender, flexible bodies and tails, more like those of lizards (to which they were often compared in early palaeontological literature). Recently discovered soft-tissue outlines of plesiosaurs show that they were actually quite robust with more stiffened, barrel-shaped torsos.

The flippers on the Crystal Palace models show a greater degree of motion than was likely true. This probably reflects Victorian assumptions of plesiosaurs being somewhat turtle-like in the way they moved. Today we regard plesiosaur flippers as having more limited movement: they had no joints along their length, and their shoulder and hip mobility probably did not permit much forward and backward motion.

These properties have bearing on another difference: the portrayal of all three models as crawling in shallow water. It’s near certain that plesiosaurs were unable to crawl around on land and evidence that they gave birth to live young negates the need for land-based behaviour. Their upward pointing eyes also indicated they were predominantly water dwelling.

The animal shown in the modern restoration below is Plesiosaurus dolichodeirus.