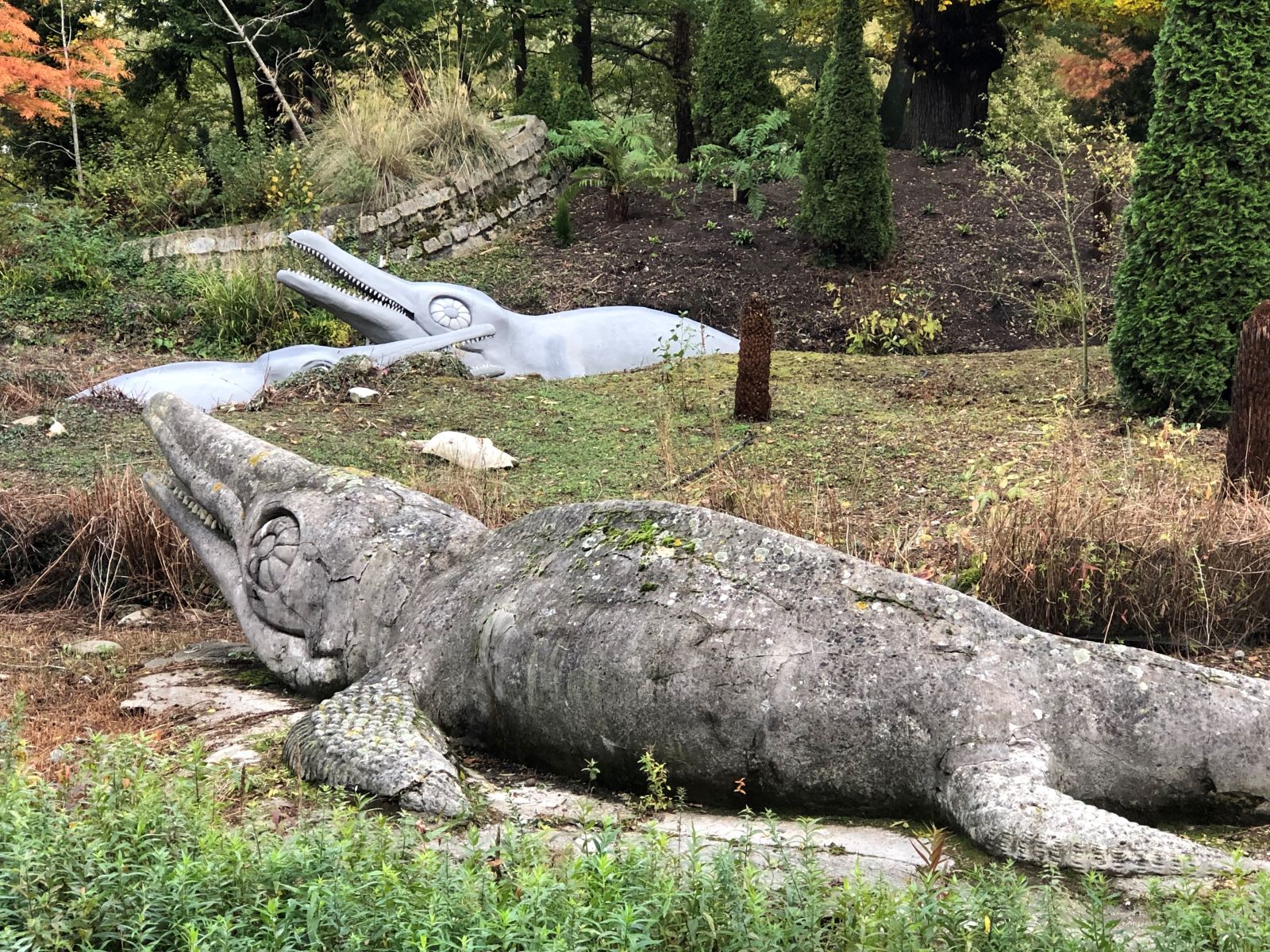 Lived: Swam in warm seas that once covered southern England and Europe

Size: Ichythosaurus grew up to 3.3 metres long and Temnodontosaurus up to 9 metres long

Diet: We know from coprolites (fossil poo) that they ate fish and squid

Statues: Three models of ichthyosaur basking on either side of a small island

Fun fact: 10 years after the models were built, Jules Verne described an epic sea battle between ‘fearless’ Ichthyosaurus and ‘monstrous’ Plesiosaurus in A Journey to the Centre of the Earth.

Much of the interpretation of the fossil material remains correct today. For example, Richard Owen, one of the scientists who advised on the models, specifically mentions the presence of smooth, scale-less skin, large eyes and predicts some sort of fin at the end of their tails, although he was uncertain of the shape. His assumption about the function of the distinctive bony eye ring in supporting and protecting the eye was also correct, although it would not have been exposed like those on the Crystal Palace models.

When the models were constructed in the mid-nineteenth century there were no detailed fossils showing the outline shape of the ichthyosaurs, in particular the dorsal and tall, crescent-shaped tail fins, so scientists assumed they were amphibious rather than fully aquatic and depicted them only partially submerged in water, coming ashore to sleep and reproduce. This is a now long-abandoned view. Owen also assumed the shape of the flipper bones would be reflected in the skin which is unlikely given what we know of fossilised ichthyosaur skin and the relationships between bone texture and skin anatomy.

The three sculpted species likely had varied capacity for tail flexion in life, with two species (Temnodontosaurus platydon and Leptonectes tenuirostris, as we know them today) likely having more flexible tails than the relatively advanced, more ‘fish-like’ Ichthyosaurus communis. But none likely had an ability to attain an eel-like tail shape reflected in the Crystal Palace models.

Benjamin Waterhouse Hawkins, the artist who created the models, was clearly guided by whales and dolphins in his soft-tissue restoration, as evidenced by the dolphin-like grooves and lips along their jaws. This seems entirely reasonable and gives their faces an appropriate amount of soft-tissue in respect to what their skull textures imply.

We now know that ichthyosaurs also had other whale-like features, for example they breathed air and gave birth to live young (pregnant ichthyosaur fossils have been found). Scientists also recently identified fossilised blubber under the skin of an exceptionally preserved ichthyosaur. Blubber is usually found in marine mammals and shows that it was probably warm-blooded. They also found evidence of countershading (darker on the upper side and light on the underside) which makes the animal more difficult to see in water, helpful for hunting and avoiding predators.

The ichthyosaurs shown in the modern restoration below are Temnodontosaurus eurycephalus (the larger, strand-feeding species) and Ichthyosaurus breviceps (the prey animals).