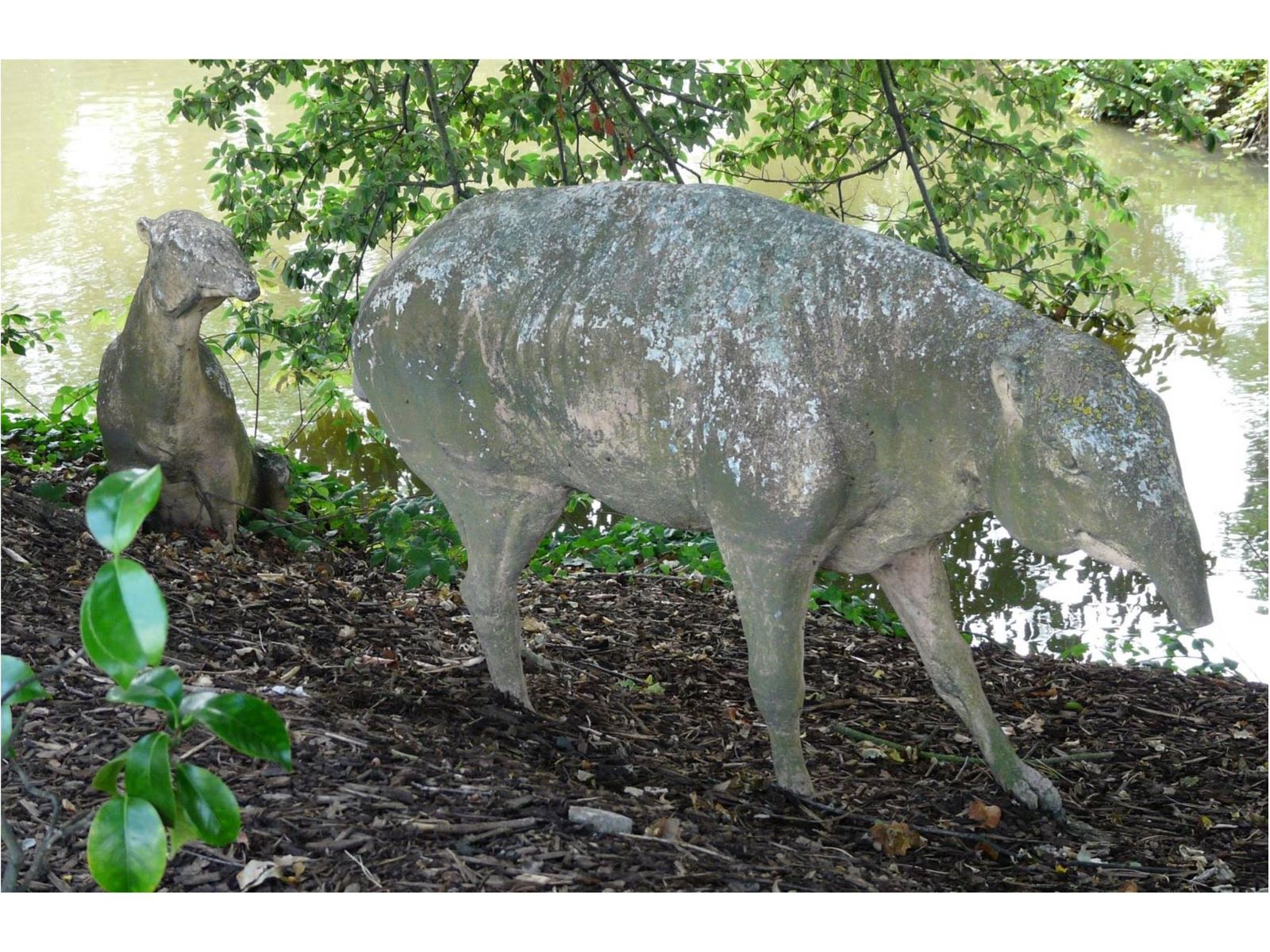 Lived: In warm temperate to subtropical forests in Britain and mainland Europe

Size: They were a relatively small mammal, standing around 75cm at the shoulder on average, although the largest species were the size of a small horse.

Statues: Two small tapir-like statues, one sitting and one standing, on the Tertiary island close to the water, also near the Anoplotherium.

The sitting model lost its head and was fitted with a replacement in the late twentieth century, but unfortunately it is once again headless.

Nineteenth century documentation and photographs from as recently as 1958 indicate that a third model once existed that was larger and distinct from the surviving models (see below) but sadly there is no record of where this is.

Fun facts: Palaeotherium is one of the historically oldest known fossil animals, having been studied by the famous French anatomist Georges Cuvier in the early 1800s.

The Crystal Palace statues vs modern scientific reconstructions: The first fossil skeletons of Palaeotherium that were recovered from France were nearly complete, so its anatomy was known in fairly good detail from early on. However, it’s somewhat difficult to evaluate the Palaeotherium models against the science of their day because of modifications that have been made to them since their original installation, including a replaced head on the sitting model and an apparently lost, larger third model.

It is a distant relative to the horse, although early scholars thought it was a tapir-like animal, so depicted it with a short trunk (proboscis). The sculptor, Benjamin Waterhouse Hawkins, evidently followed this trend with his standing model, giving it a long, tapir-like face, an arched back, a podgy, creased torso recalling that of the Malayan tapir, and short, round ears. He opted to give the feet a more horse-like appearance however, which is appropriate.

The sitting Palaeotherium model also has a tapir-like body, but it lacks the obvious creases of the other surviving model - perhaps it was meant to be a different species. The original head of this sculpture (replaced in the twentieth century) was certainly radically different in being much shorter and smaller, and not bearing strong resemblance to any living animal. Both these animals probably represent the species Palaeotherium minus, a sheep-sized species described in the early nineteenth century.

Stranger still is the lost model (below left in the photograph), which is far removed from anything especially tapir-like except its short trunk. It was about the size of a small horse, and this almost certainly labels it as Palaeotherium magnum, another species that was well illustrated in literature of the early 1800s. This large sculpture has features recalling African bush elephants, including a concave back, wrinkled skin, stocky limbs, a deep, short face and a prominent brow. This apparent referencing of elephants may seem unusual but in the early 1800s many scientists thought it to be part of the same (now obsolete) group ‘Pachydermata’ that included elephants, rhinoceros and hippo.

Photograph of the Palaeotherium, 1958 from McCarthy and Gilbert (1994). It shows a larger standing model that no longer exits at the site

Overall however, the Crystal Palace models are not far off how we regard this creature today: a browsing hoofed herbivore that must have looked something like a tapir or small, stunted horse. However, the inclusion of trunks on the models is contestable as its fossils lack many features associated with having a proboscis.

The species illustrated in the modern reconstruction below is Palaeotherium magnum.