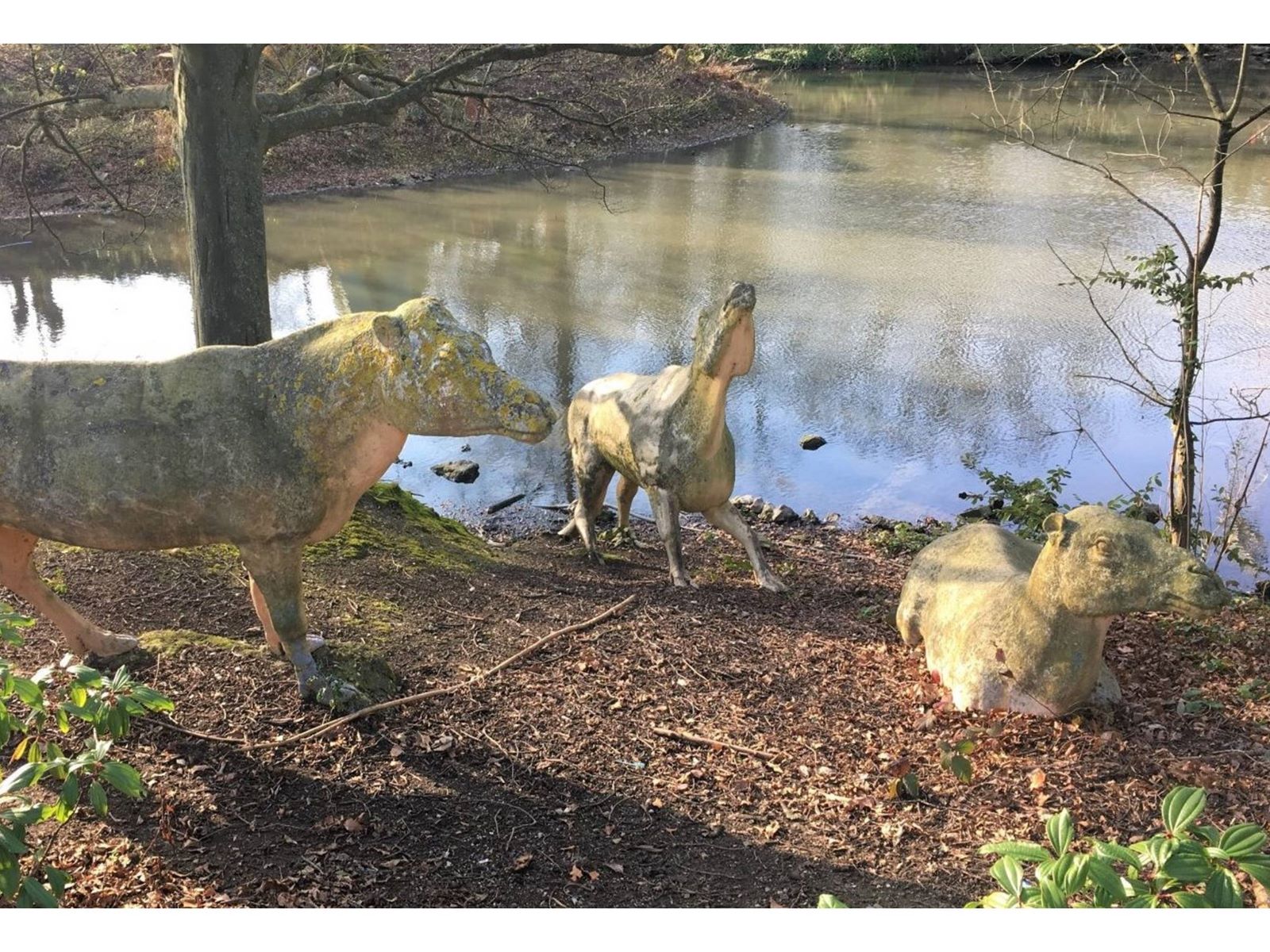 Lived: In warm temperate to subtropical forests in Britain and mainland Europe

Size: Although the Crystal Palace models show them on four legs, we now know that they fed standing on two legs balancing on their muscular tails to browse trees, and could have stood 2-3 metres tall.

Statues: Three smallish camel-like statues on the Tertiary island, one standing, one resting, and one in a curious half-crouched pose with an outstretched neck and head, close to the water, also near the Palaeotherium.

Fun facts: Anoplotherium was one of the first extinct animals to be recognised from fossils from France and Britain in 1804 by the French anatomist Georges Cuvier.

The Crystal Palace statues vs modern scientific reconstructions: The Crystal Palace models are pretty faithful interpretations of Cuvier’s illustrations of Anoplotherium based on his anatomical descriptions of the fossils, with strong, flexible-looking tails and muscular torsos.

The sculptor Benjamin Waterhouse Hawkins deviated somewhat in giving the Anoplotherium camel-like facial details, including large lips, small, rounded ears and a sloping skull roof which, whilst referencing early ideas of Anoplotherium’s systematic relation to camels, was not particularly in keeping with the fossils.

Hawkins also reconstructed the models with four toes on each foot, when they actually had three: two hoofed main digits, and smaller, somewhat opposable ‘thumbs’ on the inside of each limb. It’s possible that Hawkins added more toes because he thought the fossils were incomplete or otherwise somehow anomalous. It is also at odds with the fact that Anoplotherium is meant to be an artiodactyl (an even-toed hoofed mammal), and even today it stands as an oddball for its unusual toe counts.

In 1800 Anoplotherium was thought to be a swimming animal that used its powerful tail to propel itself through the water, perhaps like a beaver. This might be why the third statue is depicted as partly crouching, perhaps shaking itself off after emerging from the water. Today it’s no longer thought to be semi-aquatic, but rather adapted to high browsing by standing on two legs, with the tail as a balance rather than a swimming aid.