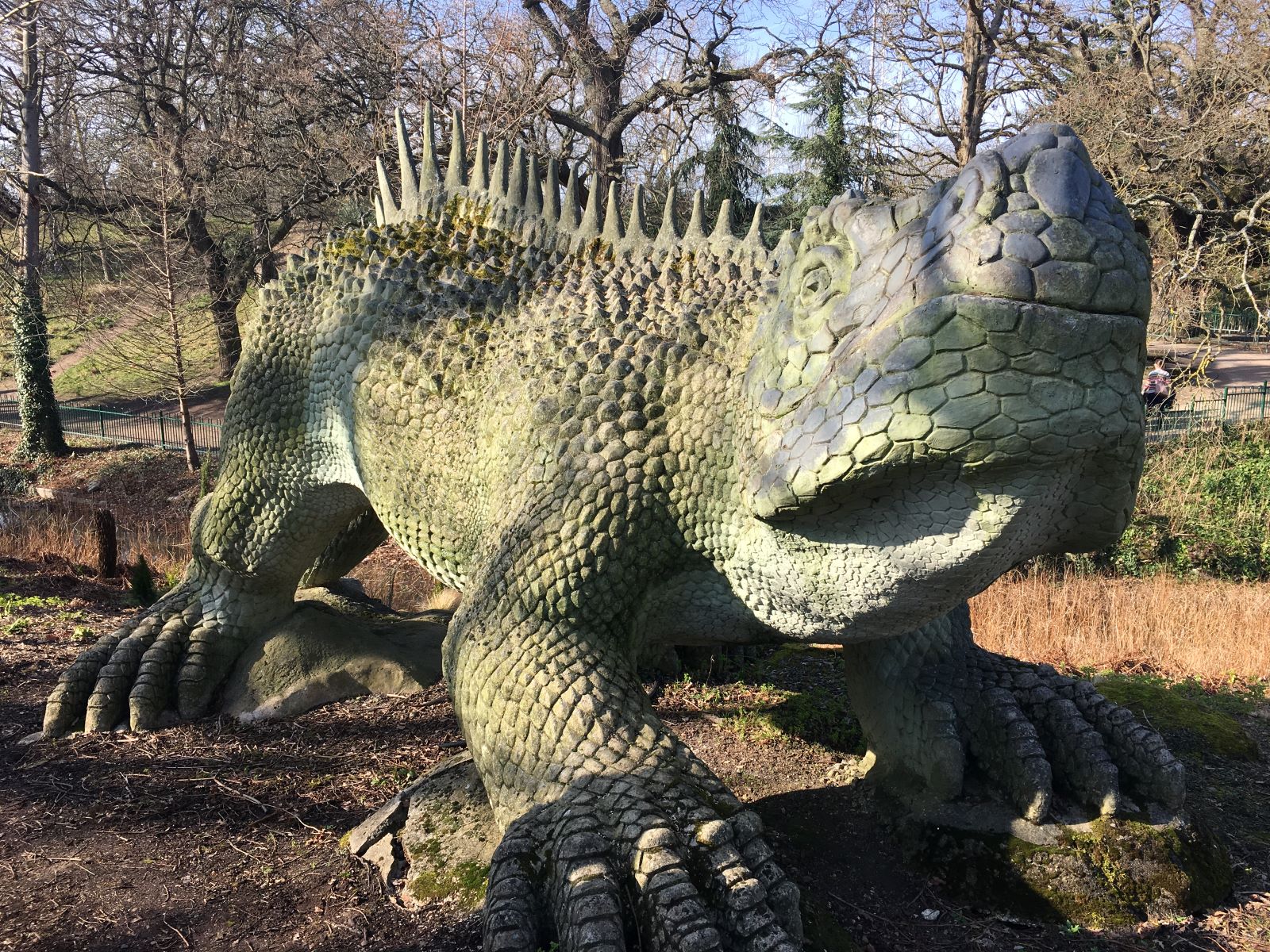 Scientific name: Hylaeosaurus, meaning ‘forest lizard’ after the Tilgate forest in the Wealden, Sussex where it was found.

The species depicted is Hylaeosaurus armatus.

Size: About five metres long, although it has been estimated at slightly shorter and longer.

Statues: Single large individual standing between the Iguanodon and Megalosaurus facing away from the bank, with its armoured back on display to the public and most of its face hidden from view. Its head is a fibreglass replica; the original is on the hill overlooking the lake.

Fun facts: Hylaeosaurus was the first ankylosaurian (armoured) dinosaur known to science and was discovered by the famous scientist Gideon Mantell.

The Crystal Palace statues vs modern scientific reconstructions: One of the explanations for Hylaeosaurus facing away from the public is that good cranial fossil material was not available for the species in the mid-nineteenth century. However, although there was not a complete skull, it had comparable material to that of the Megalosaurus so this doesn’t seem to be the case. Perhaps it was simply an effort to show off its impressive armoured back.

Today the species is chiefly represented by a large slab with a portion of skull, neck and shoulder vertebrae, and bony plates that covered its shoulder. However, at the time of the model’s creation there was also thought to be further jaw, teeth, limb bones and vertebrae. Some of these specimens have since been assigned to other species, e.g. the jaw to a stegosaur and the teeth to a sauropod. As a result, the Hylaeosaurus is one of the most ‘patchwork’ of all the Crystal Palace dinosaurs, mixing elements that are actually from several different groups of dinosaur.

Given the mix of material being worked with, the sculptor, Benjamin Waterhouse Hawkins, actually did a pretty good job in his reconstruction. Two types of bony deposits on the skin (‘osteoderms’) were recognised in the 1830s and 1840s – large spikes that usually featured prominently down the back, decreasing in size towards the tail, and smaller bony structures that covered the braincase, shoulders, back and hips. Both are rightly prominent on the Crystal Palace model. However, there was much debate about whether there would have been a single or multiple rows of spines along its back; today we know they are usually covered in multiple rows of dorsal spines, but this was not yet known in time for the Crystal Palace models, where a single row of large spikes was depicted.

Though sporting some very fine facial features (though lacking the beak of true ankylosaurs), Hylaeosaurus is Hawkins’ only dinosaur sculpture without visible teeth. Perhaps, if the sculpture was always planned to face away from visitors, Hawkins decided that sculpting an open mouth with individually placed teeth would be unnecessary.

Overall, Hawkins’ Hylaeosaurus is his most authentic dinosaur with respect to our modern understanding, accurately capturing an ankylosaur as a low-slung quadruped (four-legged) with a short neck, long tail and an armoured back. The resultant impression is of a lower, slower animal than either Megalosaurus or Iguanodon. The depiction of Hylaeosaurus as a heavyset quadruped was also vindicated in 1858 with the discovery of Scelidosaurus harrisonii, another armoured dinosaur, in Jurassic deposits of Britain.