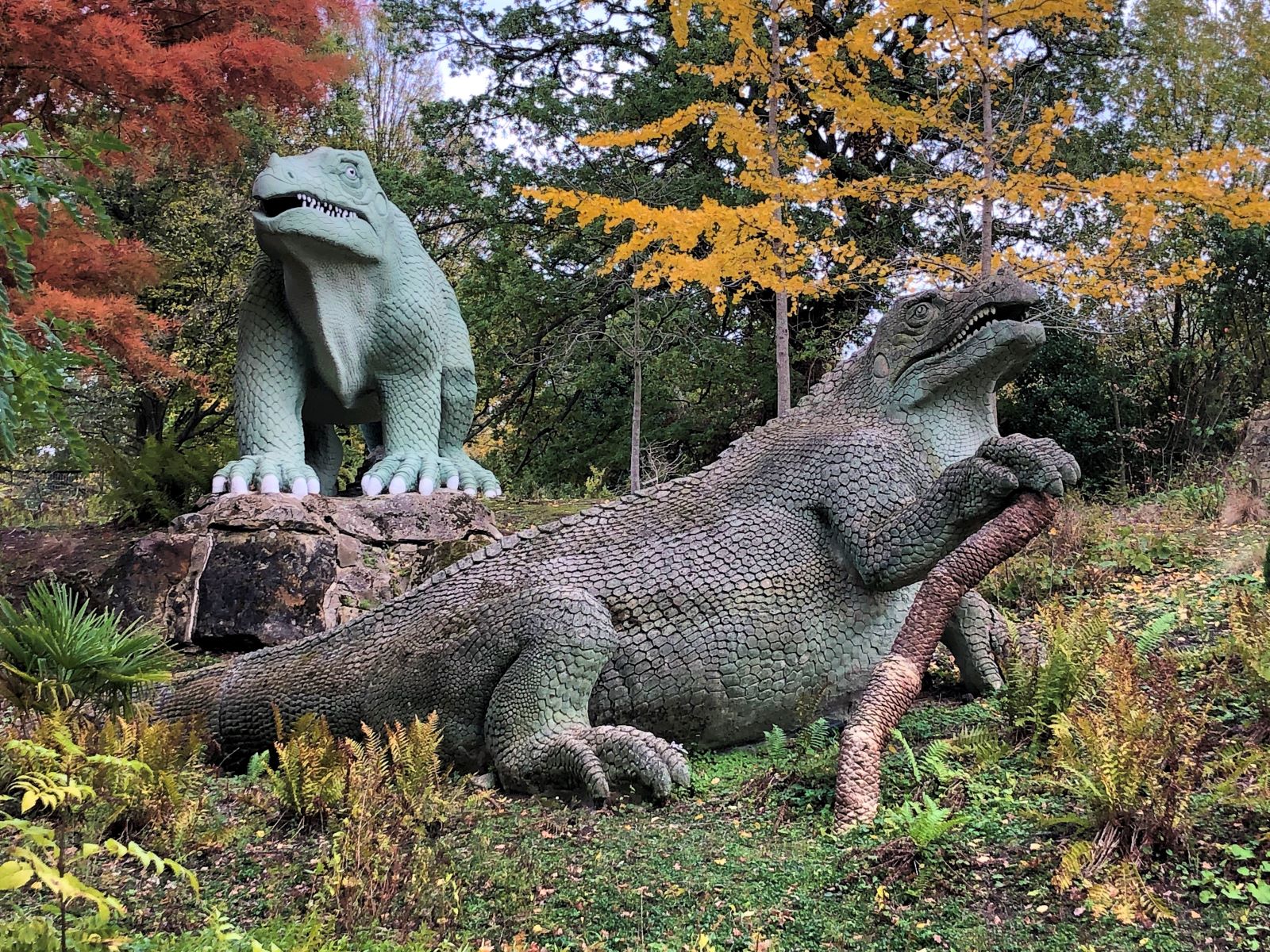 The species that the Iguandon statues were based on has since been renamed Mantellodon (meaning ‘Mantell’s tooth’) after the famous scientist Gideon Mantell who described their fossil remains.

Statues: Two models illustrate the conflicting ideas in the 1850s about how this dinosaur might have stood: one on four legs, like an elephant and the other sprawled like an iguana on the trunk of a cycad, a tropical plant whose fossils have been found near iguanodon remains.

Fun facts: The famous Dinner in the Iguanodon was held in the mould for the standing iguanodon sculpture in 1853.

The famous Maidstone Slab fossil, preserving one of the most complete finds of Iguanodon, is also known as the ‘Mantell-piece’ after Gideon Mantell who described it.

The Crystal Palace statues vs modern scientific reconstructions: Iguanodon was probably the best known dinosaur to science in the mid-nineteenth century, which might explain why this dinosaur was captured in two models rather than just one. Today, it’s hard to say exactly what animals the Crystal Palace models truly represent. Until relatively recently Iguanodon was a wastebasket for iguanodont material from the southern UK and several distinct taxa have now been identified among the British Iguanodon material.

Twenty years after the Crystal Palace statues were constructed, new skeleton finds showed that the bones that had been placed as horns on their noses should have been placed on the hand as they are in fact thumb spikes, probably used for defence against predators. At the time the sculptor, Benjamin Waterhouse Hawkins, was probably inspired by the presence of nose horns in many iguana species.

Iguanas may have informed the models in other ways too such as the presence of their large conspicuous ‘eardrums’ on the side, dewlaps, the midline body and tail spines, and details of their overall scalation. The beak and blunt claws are deviations from iguanas and were correctly restored for Iguanodon, these presumably being based on lower jaws and digit bones recovered during the early 1800s.

Just over a decade after the Crystal Palace dinosaurs were installed, discoveries of an Iguanodon-like dinosaur (Hadrosaurus) in New Jersey, USA began to erode the credibility of Hawkins’ Iguanodon. Belgian discoveries in 1878 would eventually give us our modern take on Iguanodon anatomy, so different from the Crystal Palace portrayals. They revealed an animal with powerful hindlimbs; relatively slender, shorter forelimbs equipped with large thumb spikes; a beaked and horse-like head; and a long, powerful tail. However, it is still thought that Iguanodon could probably walk on two or four legs, as suggested in the modern reconstruction below.

It should be observed how lifelike and detailed Hawkins’ Iguanodon are in comparison with many other sculptures in the Geological Court. They have a touch more dynamism: the subtle spread of the belly and pawing of the cycad trunk by the reclining individual give a great sense of character, and through the contrast with its standing partner we get a sense of different behaviours and attitudes among these anatomically fictional, but entirely believable forms. It’s only among his mammals that we see comparably animated, charismatic poses, and it’s perhaps the size of the Iguanodon, coupled with their posing, that makes them the most spectacular models of the entire display.