#ArtStrike - Extinction through the lens of the Crystal Palace Dinosaurs 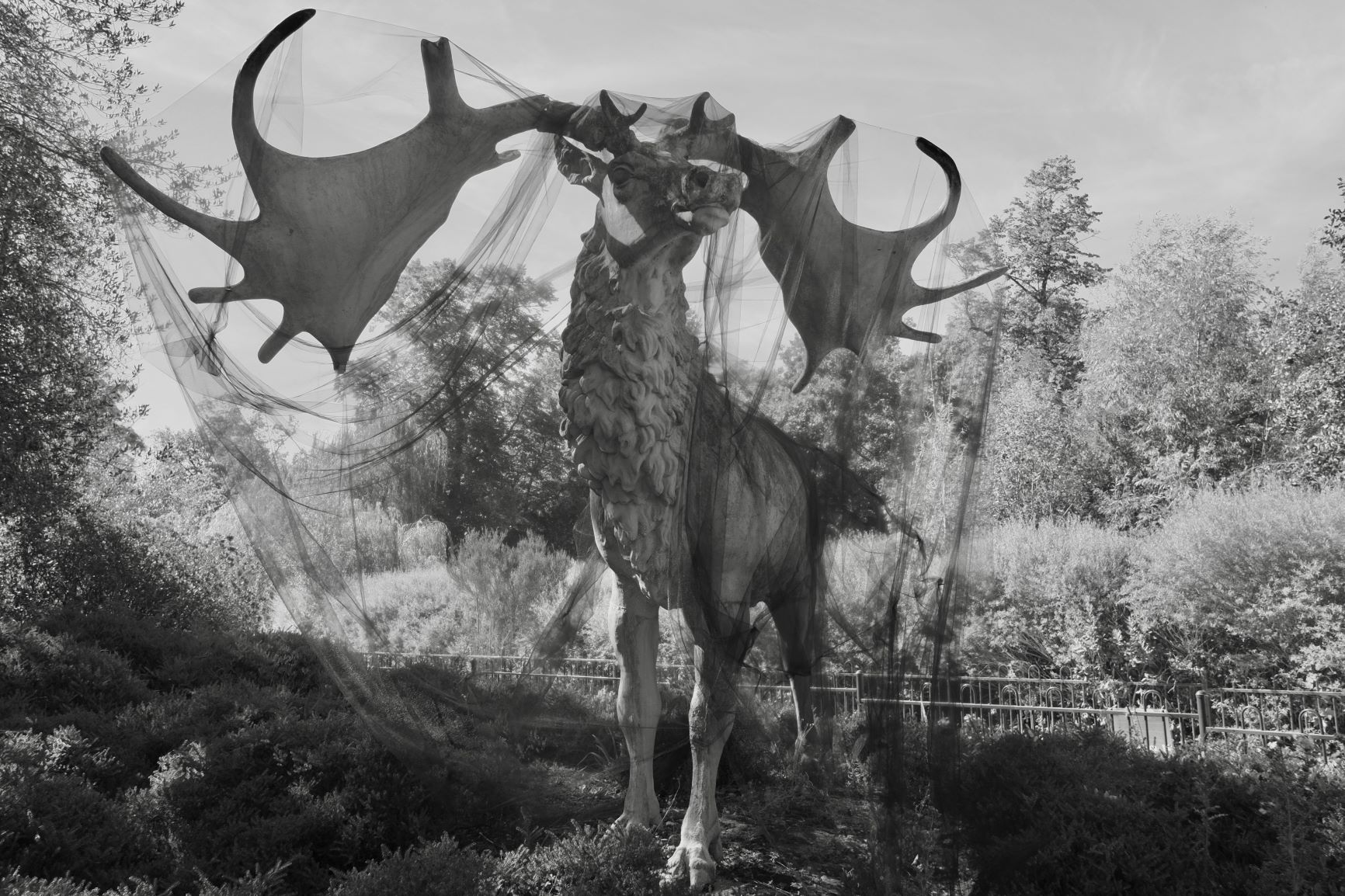 Friday 20th September marks the start of the global #ClimateStrike calling for more concerted action to tackle climate change. #ArtStrike encourages museums and galleries to show support for the movement by putting a selected specimen ‘on strike’ for the day.

The Crystal Palace Dinosaurs have a unique place in the history of public engagement with science, being the first ever reconstructions of extinct animals unveiled in 1854, so we felt well-placed to take part in this outreach event. 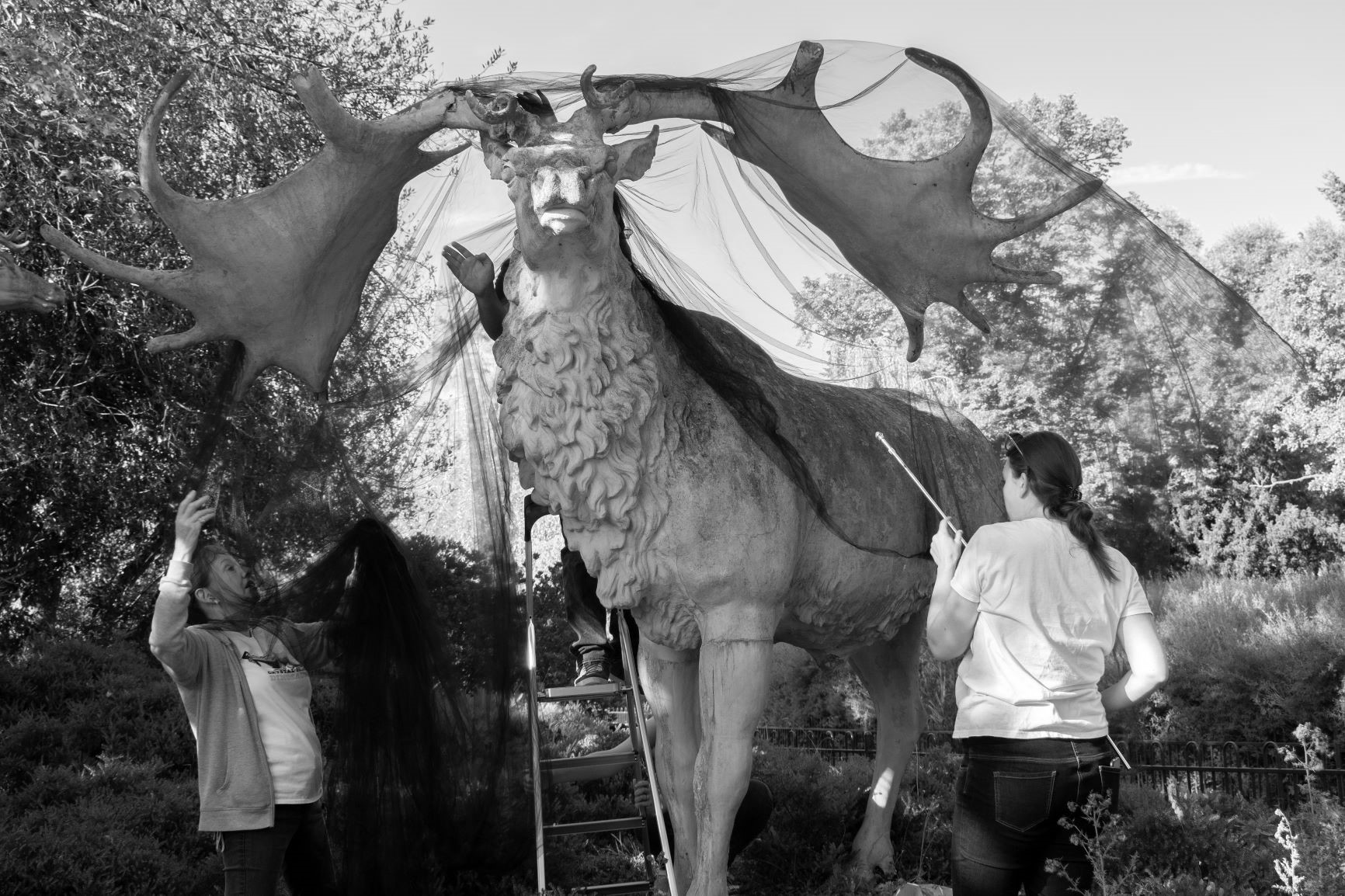 During our educational and fun-packed Dino Day on Sunday 15th September we took some time out to shroud one of the magnificent Giant Deer, inspired by Bristol Museum’s decision to shroud endangered and extinct animals to highlight the biodiversity extinction crisis.

This enormous beast, also known commonly as the Irish Elk, stands 2 metres at the shoulder with antlers 3.5 metres wide, and lived from around 400,000 - 7,500 years ago in open park-like woodlands of Europe and central Asia. 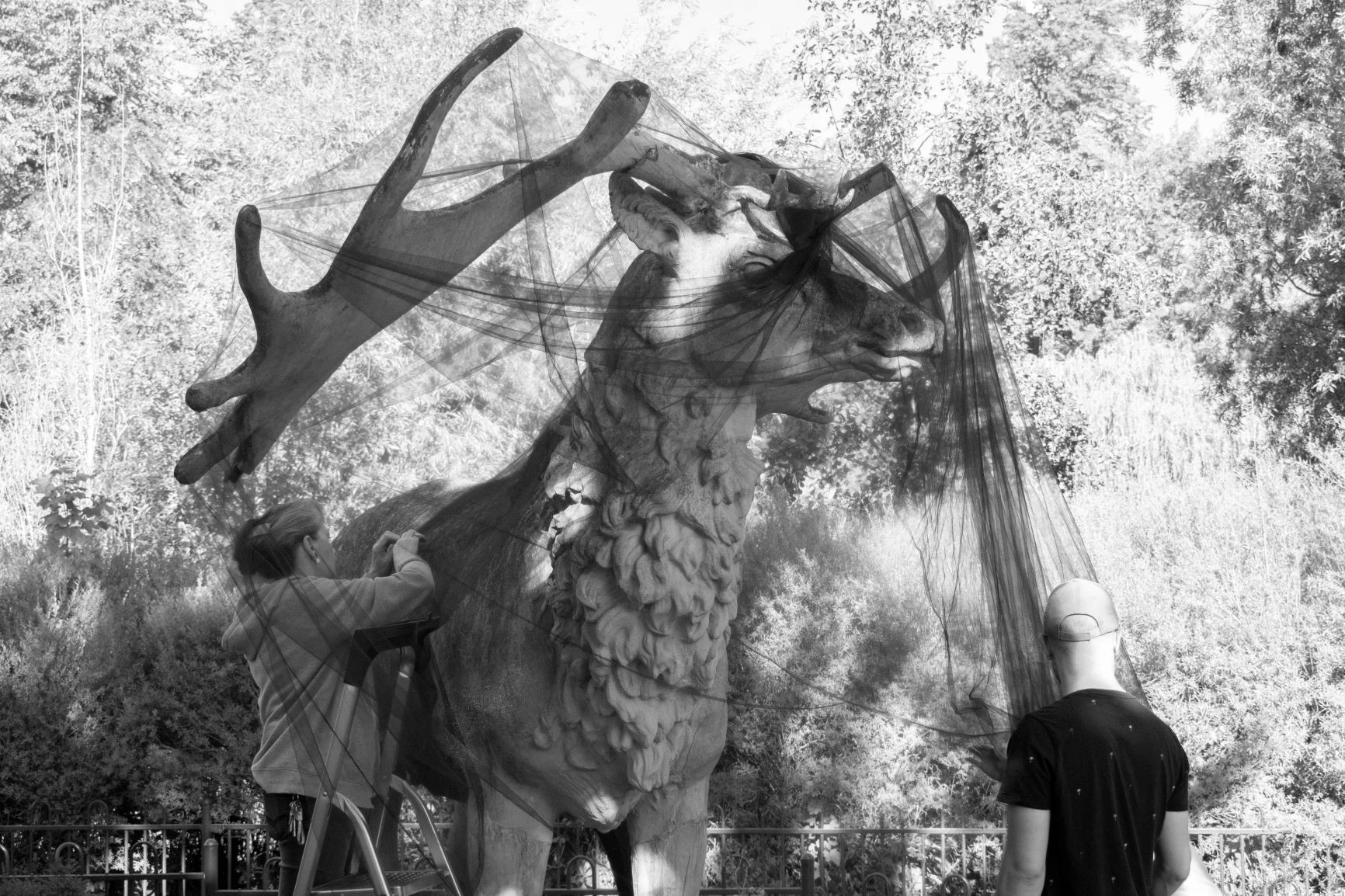 Fossils of the Giant Deer were discovered in the late eighteenth century which was an important time in the natural sciences. The great French scientist of the day, Georges Cuvier, studied fossil remains of species like the Giant Deer and mammoth and concluded that they were not like any animal alive at the time.

This led to an astonishing revelation: some animal species had actually vanished from the face of the Earth. The idea of extinction was thus born. The notion of ‘failed’ species was highly contentious in religious Victorian society’s understanding of a perfect God, and took some time to be accepted. 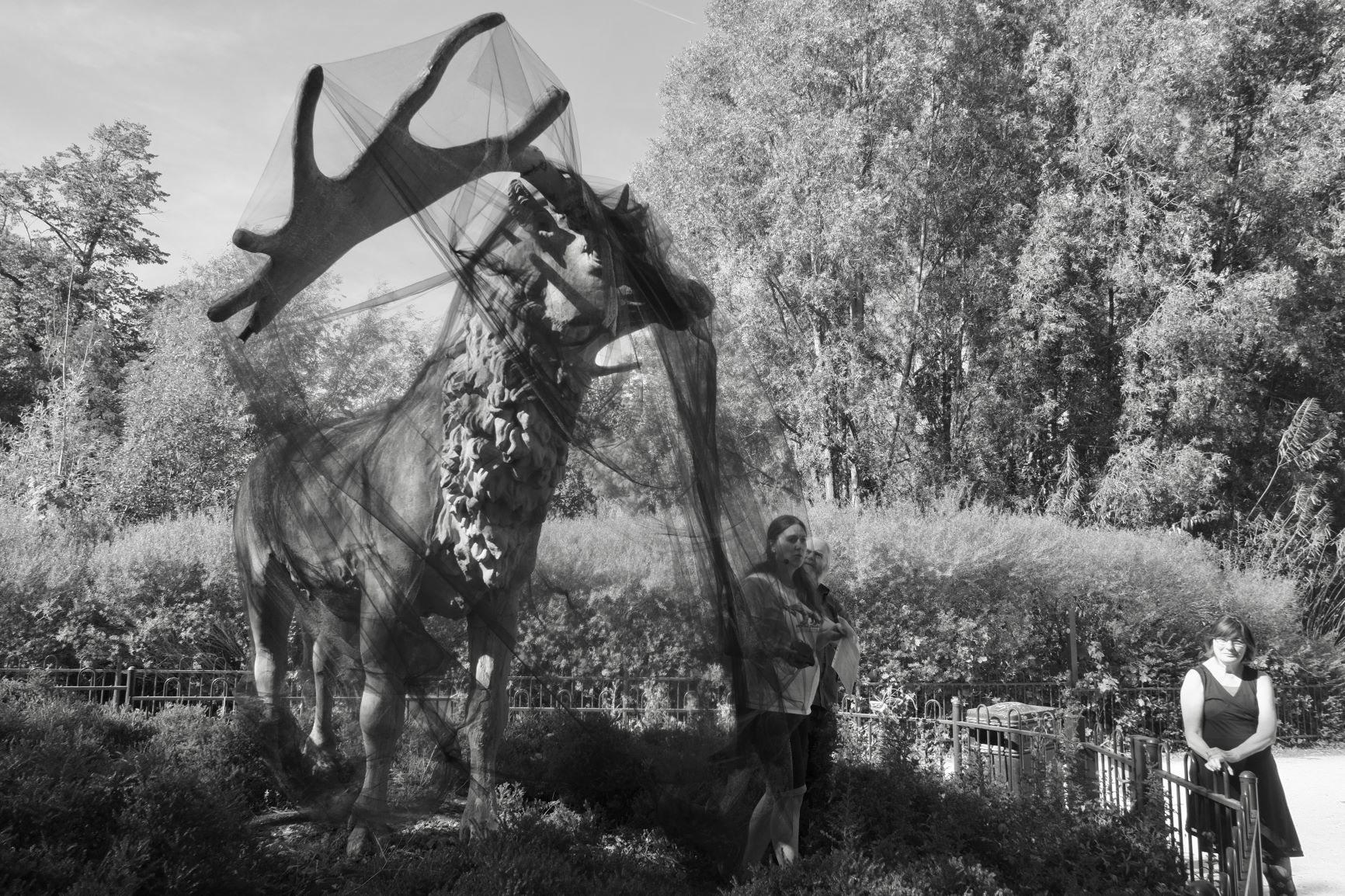 Soon after Cuvier’s revelations, the concept of extinct animals and lost worlds was first brought to the imagination of the everyday person here in Crystal Palace Park. Over twenty different extinct species were built here between 1851-1853, the first ever life-sized depictions of such creatures.

The sculptures are historic in marking this profound expansion of our understanding that the world can change quite dramatically, and significantly shaped the public’s view of nature and evolution. 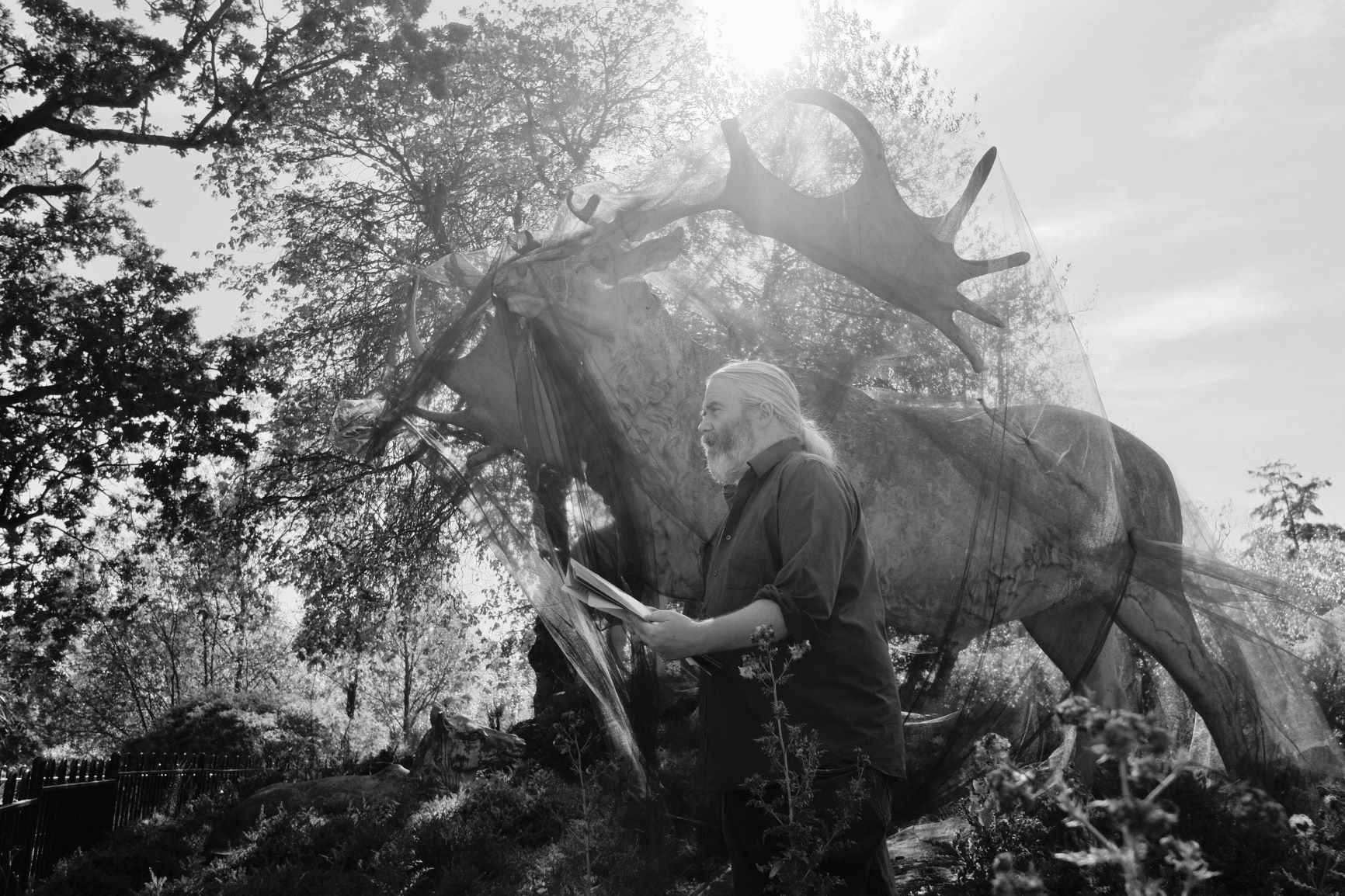 Many of the species in Crystal Palace Park lived long before humans and died out from huge environmental catastrophes in mass extinction events. However, the Giant Deer lived much more recently, overlapping their range with humans in Eurasia from around 35-40,000 years ago.

The latest scientific research indicates that fluctuating and deteriorating climatic conditions at the end of the last Ice Age led to severe loss of habitat for the Giant Deer. Hunting by human populations that were expanding across Eurasia were then likely to have put the final nail in the coffin for the species.

The extinction of the Giant Deer thus serves as a stark reminder of the effects that a rapidly changing climate and human impacts can have on even mighty beasts.

We were honoured to be joined on the day by the poet and Crystal Palace local Joe Duggan who performed two poems for the event, ‘Bogland’ by the Irish poet Seamus Heaney featuring the Irish Elk and ‘Tiger Drinking at Forest Pool’ by Ruth Padel. We were also joined by Kate Shipp, a local member of Lewisham Extinction Rebellion. Trustees Ellinor Michel and Jennifer Crees spoke about #ArtStrike and the extinction of the Giant Deer.

We are hugely grateful to Tom Fishenden, John Barrett and Kevin Ireland for their photography and our army of volunteers for help with the shrouding.