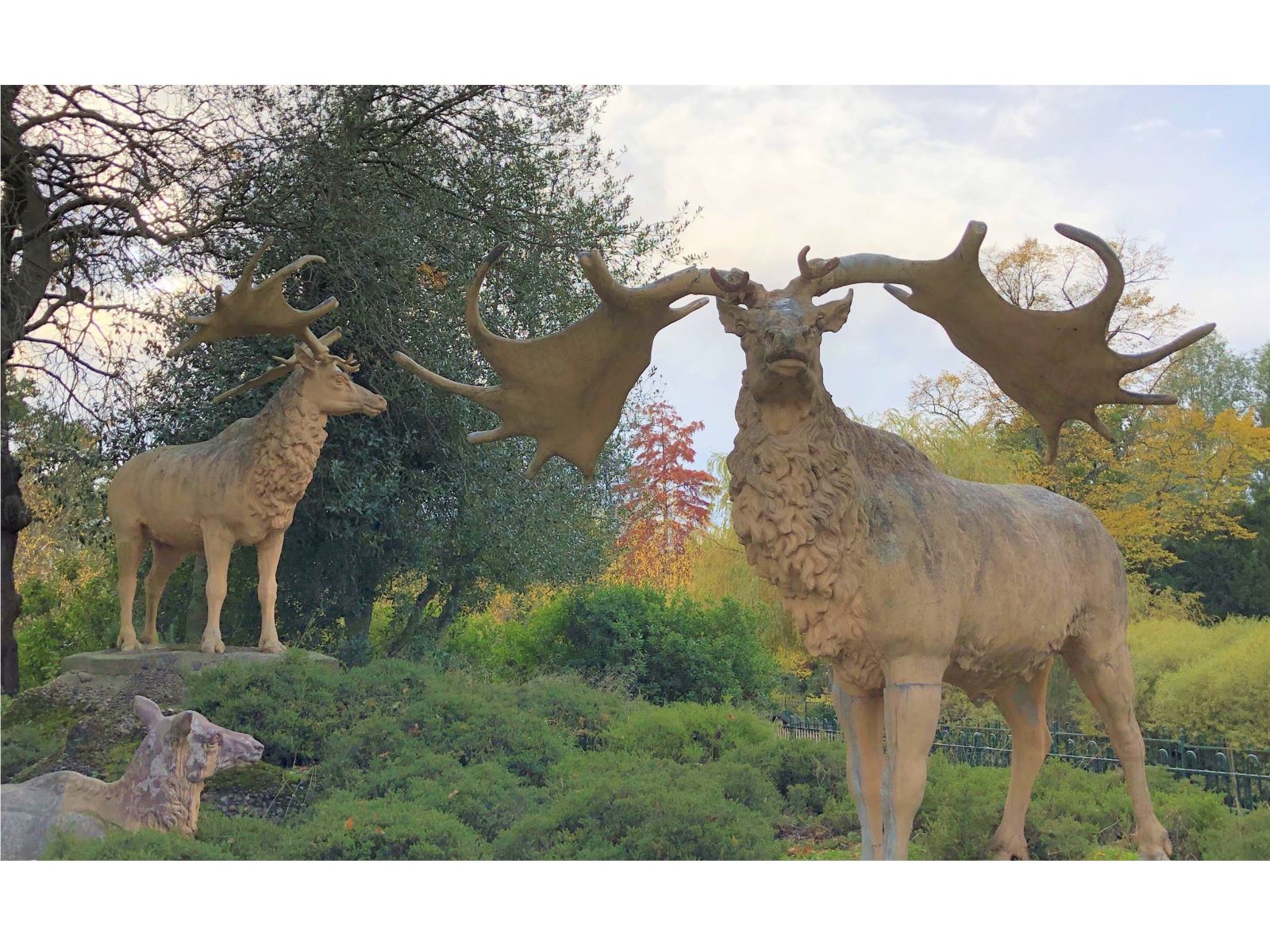 Visitors to Crystal Palace would have had this species presented to them under the anatomist Richard Owen’s 1844 name, Cervus (Megaceros) hibernicus. The nomenclatural history of Megaloceros is confused by several names being coined for this species by authors in the 18th and 19th centuries. However, it is now recognised as one species, Megaloceros giganteus.

Common name: Giant deer, Irish elk (many of the best preserved specimens have come from lakes and peat bogs in Ireland).

The giant deer survived until as recently as a few thousand years ago. Current evidence suggests it started to disappear in western Europe due to deteriorating climate at the end of the Ice Age from ca. 13,000 years ago, and finally became extinct from eastern Europe and Siberia following the spread of closed forests after the onset of the warmer Holocene Epoch ca. 11,500 years ago. However, the expansion of human populations in Eurasia may also have had a role in its disappearance.

Size: Megaloceros giganteus, one of the largest deer known to have existed, stood up to 2 metres at the shoulder with antlers up to 3.5 metres wide.

Statues: Family of two standing stags and a reclining doe and fawn.

Fun fact: One of the stags originally had actual fossil antlers but they had to be replaced when the statue couldn’t support them.

The Crystal Palace statues vs modern scientific reconstructions: The Megaloceros family are probably the most accurate of all the statues. As it became extinct relatively recently, lots of intact fossil skeletons (discovered as early as the 1600s and described by the 1800s) were available to base the reconstructions on. They could also be modelled on living deer species; whilst some of the earliest interpretations of the Megaloceros were as a moose-like cervid, its closest living relative is actually the fallow deer which possesses similar, albeit much smaller, flattened (palmate) antlers.

Megaloceros was originally thought to be related to the group of deer known as Cervus that includes red deer and the sculptor, Benjamin Waterhouse Hawkins, appears to have referenced this is the models’ anatomy. Examples include the thick neck manes, deep fur over the withers, and a line of long, shaggy fur along their bellies. These are especially obvious on the stags, but also present on the reclined female. Manes are not common to many deer females, and Hawkins was probably referencing the winter appearance of certain subspecies of North American wapiti, perhaps thinking that this was more apt for an Ice Age animal.

In the modern reconstruction below, Megaloceros is depicted with a rounded, tall shoulder hump, a dark, collar-like band of fur that extends all the way to its back leg, and a pale head and neck contrasting with darker fur over the body. These amazing details are taken from cave art of the giant deer, another incredible resource for recreating extinct species if they lived recently enough and overlapped with modern humans.

This information was unknown to Hawkins, however. The discovery of ancient European cave art post-dates the Crystal Palace project by over a decade, and its acceptance by scientists as the work of authentic Palaeolithic humans, and not modern vandals, was even longer coming. Moreover, even once ancient cave art was accepted as a genuine part of European history in the early 20th century, it would take decades to discover enough Megaloceros cave paintings to deduce meaningful details of its anatomy and colouration.