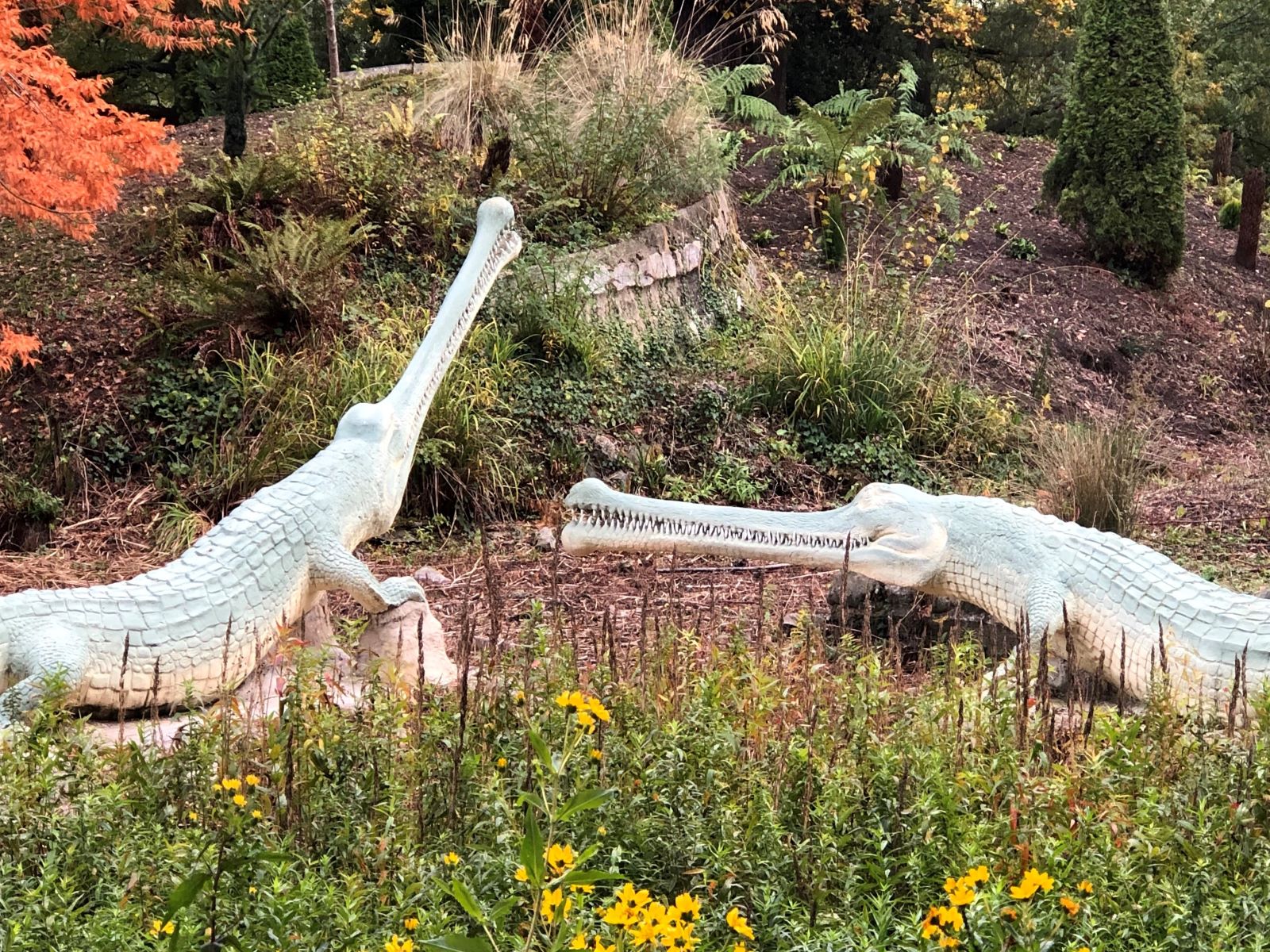 Lived: Teleosaurus was discovered in the UK but specimens of the wider teleosaur group have been found globally

Diet: Fish and squid - they would have been very fast, streamlined swimmers that could chase and snatch prey in their long jaws

Fun fact: Although teleosaurs look like modern crocodylians such as the gharial, they are not in the same evolutionary lineage. This is an example of ‘convergent evolution’, where species that aren’t closely related independently evolve similar traits as a result of having to adapt to similar environments or ecological niches. For example, the long snout of both teleosaurs and gharials is considered an adaption to fish eating (‘piscivory’).

The Crystal Palace statues vs modern scientific reconstructions: The two Teleosaurus models are some of the finest reptile restorations in the Crystal Palace arrangement. Its general proportions are captured correctly with the short limbs, long body and narrow jaws, as well as their depiction as semi-aquatic, basking on the shoreline.

However, the models have several anatomical peculiarities that not only conflict with modern understandings of these animals, but also those of Victorian Era palaeontologists. For example, the extinct teleosaurs had two rows of large scutes (bony plates) from their necks to their tails, and a shield of interlocking scutes on their bellies, whereas the scaling pattern on the Crystal Palace models is much more similar to modern crocodylians. Likewise, the back of the head is short and narrow (like a gharial) instead of long and expanding outwards towards the back of the skull as in teleosaurs. The result is a enigmatic blend of crocodylian and teleosaurid anatomy.

Interestingly all these details were apparently known to Richard Owen, one of the anatomists who advised the sculptor Benjamin Waterhouse Hawkins on the models. Yet Hawkins is not the only palaeoartist to apply modern crocodylian scalation patterns to their ancient relatives so it may be a genuine mistake. However, even more curiously, Owen did not mention these anomalies in his 1854 guide to the sculptures, even though he understood teleosaurid scale arrangement down to the differences between species (Owen is not afraid of pointing out aspects of the models that he disagrees with or are speculative). The reason for this discrepancy in anatomy is therefore unknown.

The animal shown in the modern restoration below is Lemmysuchus obtusidens. It is about the same size as the Crystal Palace Teleosaurus, but the skull and dentition are more robust.