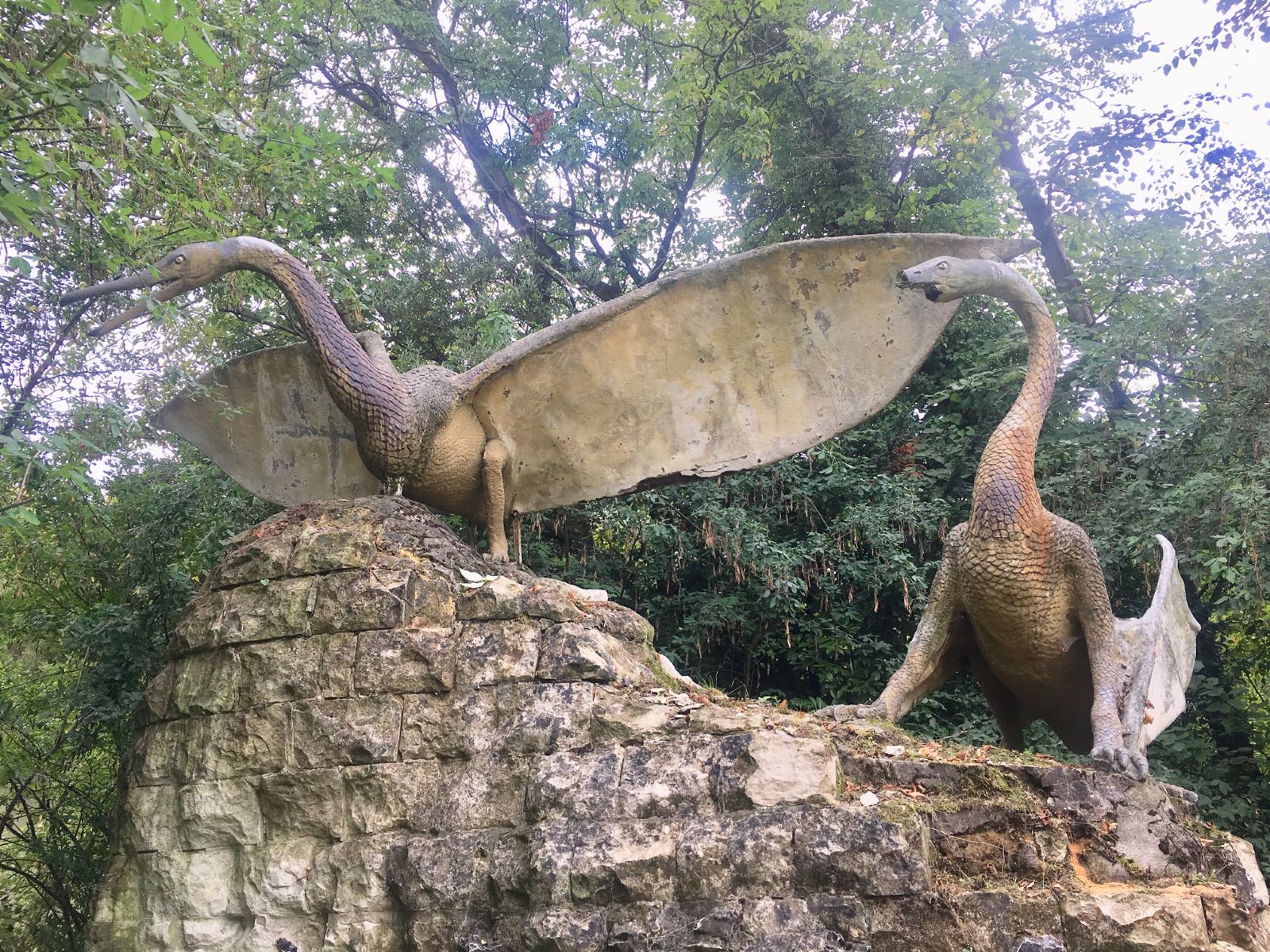 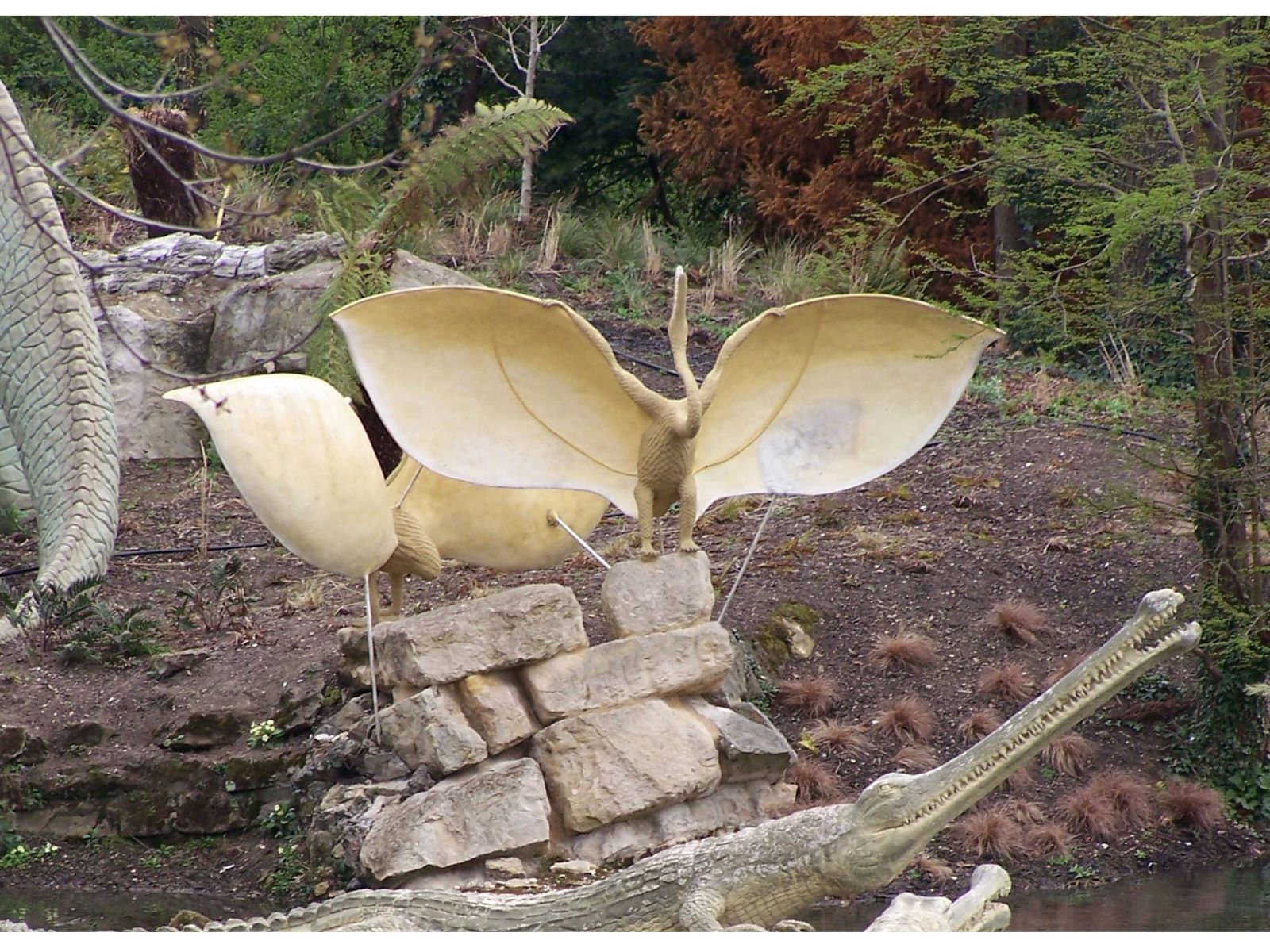 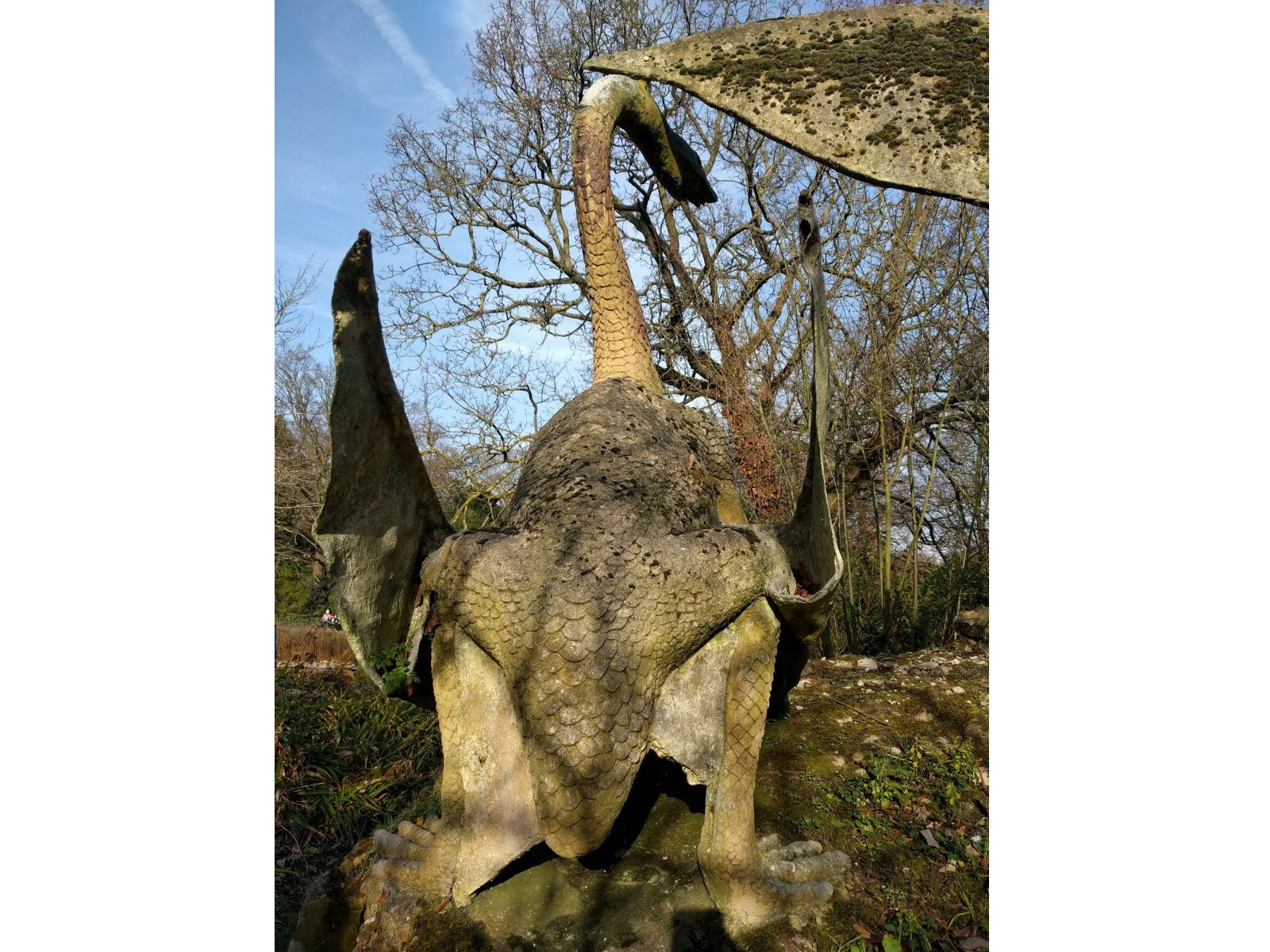 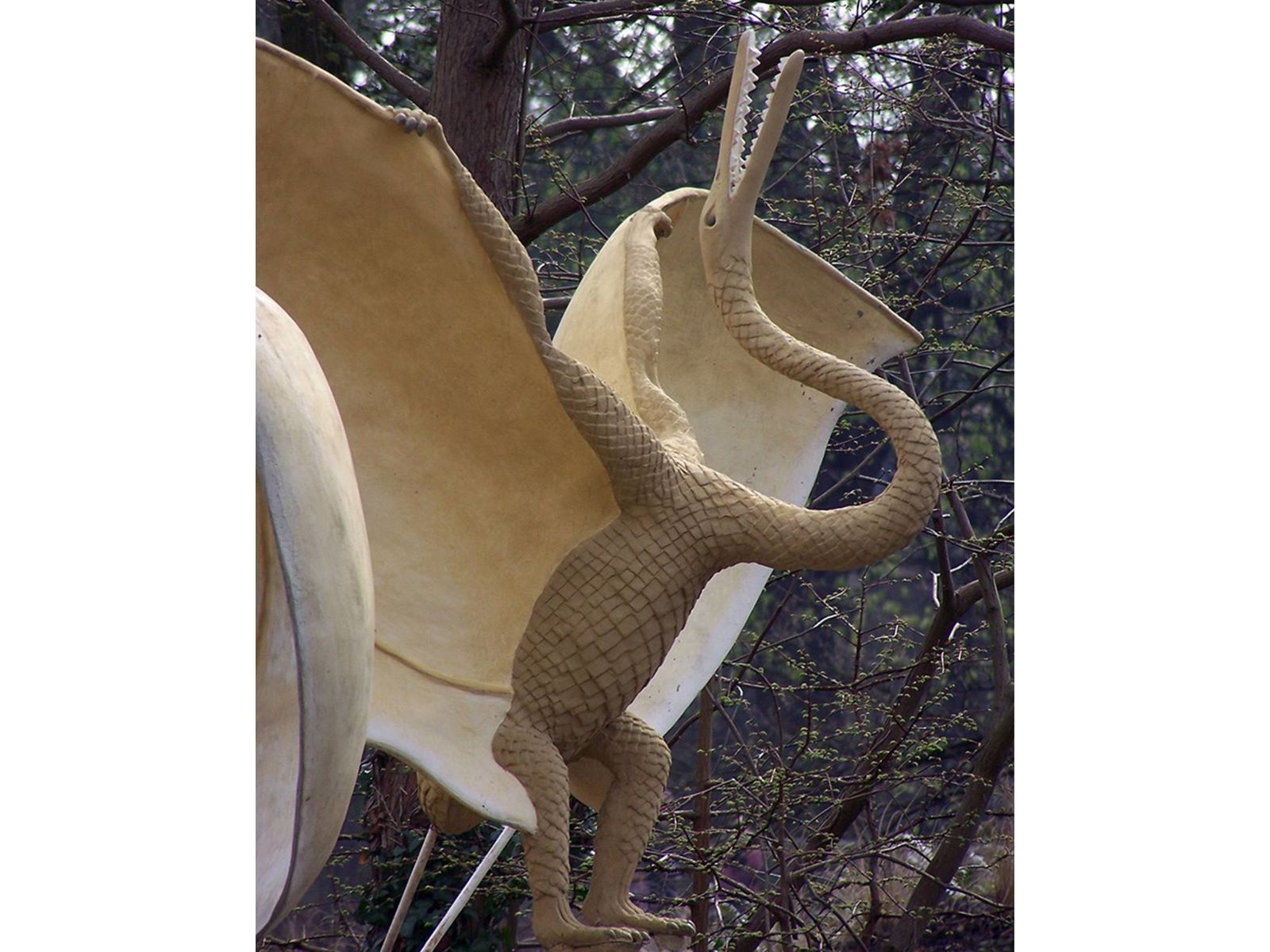 Two main species were originally depicted at Crystal Palace. “Pterodactylus” cuvieri (the darker stone models in the pictures above) and “Pterodactylus bucklandi” (the smaller, sandy coloured set of models). Both of these species have since been renamed (see below).

However, neither of these animals was well known when the statues were built in the 1850s (and, indeed, they remain poorly known today) so it’s likely that all four models were based on complete Pterodactylus antiquus skeletons known from Germany, based on their long necks and teeth.

Whilst they were formerly known as ‘pterodactyl’, this term is now outdated and not used as a common name as it only describes one species in the wider pterosaur group.

Lived: Whilst Pterodactylus antiquus was known mostly from Europe, pterosaurs in general had a worldwide distribution.

Size: Pterosaur body size varied hugely but wingspans could stretch from the size of a sparrow to a fighter jet. The models depict pterosaurs with a 5-6 metre wingspan.

Diet: Different pterosaur species had widely varied diets from meat eating to plant eating. Stomach contents for some pterosaur species show they ate fish, whilst others have very clear feeding adaptions like filter-feeders and those with teeth to crush molluscs.

The original models of the latter went missing in the 1930s and fibreglass replacements installed in 2002 were stolen and destroyed by vandals in 2005. The larger models remain but are in disrepair, owing to their relative delicacy.

Fun facts: Pterosaurs are not dinosaurs! Although pterosaurs are close relatives of dinosaurs, they are not part of the same evolutionary group.

In this respect the pterosaurs were fairly typical of pterosaur restorations from the 1800s, but they are somewhat different to how we imagine them today. The German zoologist Georg August Goldfuß had recorded solid evidence of pterosaurs having a fuzzy, hair-like covering as early as 1831, but this feature is absent from the models. This is because most scientists, including Richard Owen who advised on the anatomy of the sculptures, assumed that pterosaurs were scaly. This view even persisted up until the 1970s.

Their overall proportions are also slightly odd and differed to what was known about the animals from fossils at the time. The very first pterosaur fossils known to scientists were complete skeletons showing that their heads were longer than their bodies, and yet the sculptor of the Crystal Palace statues (Benjamin Waterhouse Hawkins) - like virtually all artists of the 1800s - restored them with small heads and massive torsos.

Waterhouse Hawkins seemed to have made an artistic decision to model his pterosaurs with a bird-like physique, including deep bellies, horizontal thighs, a large pelvic region with a poorly defined tail, and a proportionally small head. He also depicted the wing membranes as being attached to the body alone, leaving the hindlimbs free. This creates the impression of a bird-like wing arrangement, even though most of his peers were illustrating (more accurate) bat-like membranes which stretched all the way to the hindlimb.

Some details are more accurate, such as posing one animal on all fours, and placing the full length of the foot on the ground. However, the overall impression is of a goose or swan-like creature with pterosaur features rather than a precise representation of the fossils. However, the Crystal Palace models are not unique in that sense - very few pterosaur restorations from the early decades of palaeontology have accurate body proportions.

Today we also recognise that the fossils that informed the Crystal Palace models are actually distantly related and anatomically distinguished from the specific genus (group) Pterodactylus. The large chalk species still present at the site were long-winged soaring specialists with sophisticated teeth adapted for catching fish, similar to Cimoliopterus cuvieri, shown below on the left. The missing “P. bucklandi” species was probably a long-tailed animal with protruding teeth and may have looked somewhat like the contemporary Oolite species Klobiodon rochei, shown below on the right. 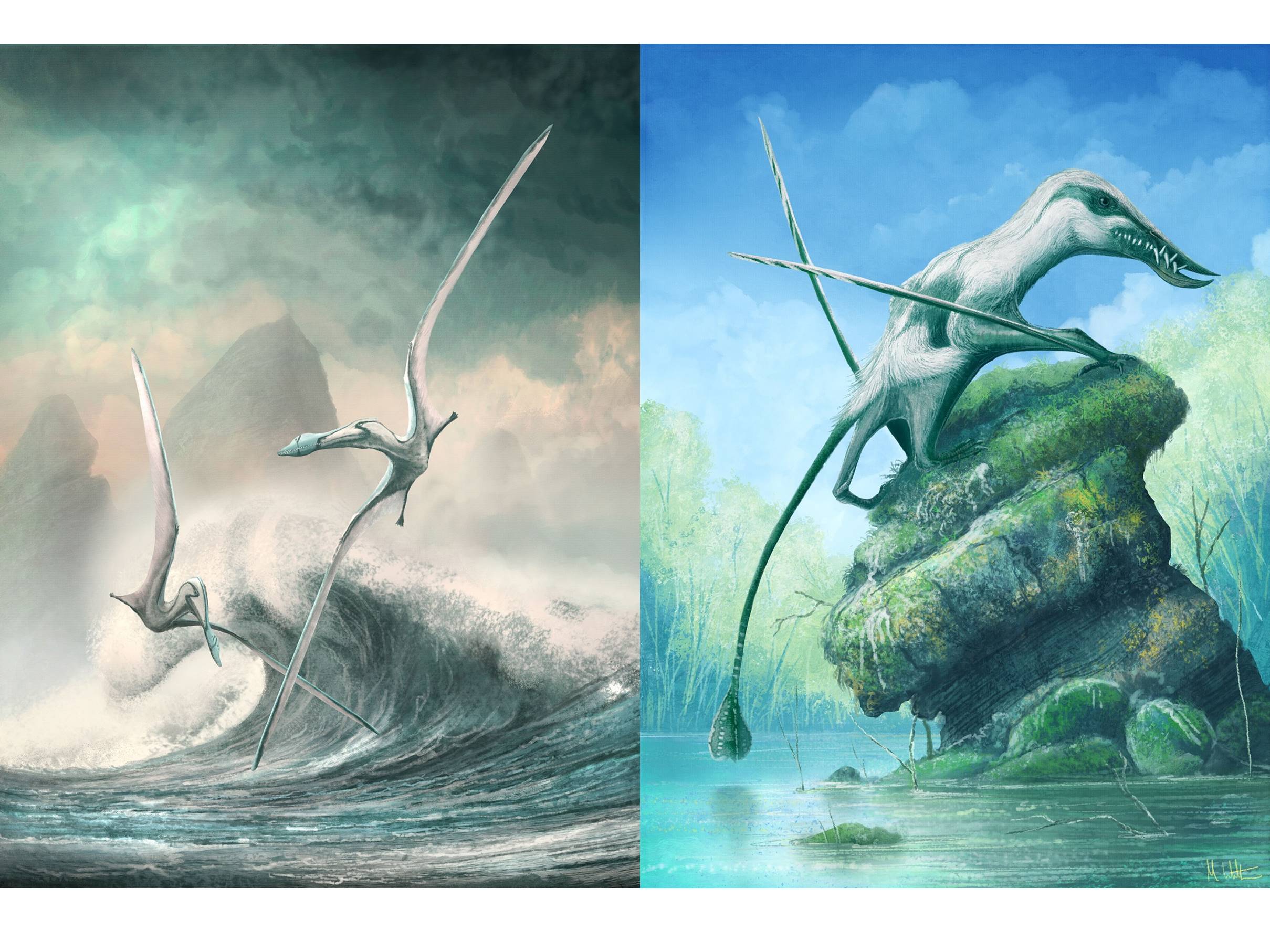