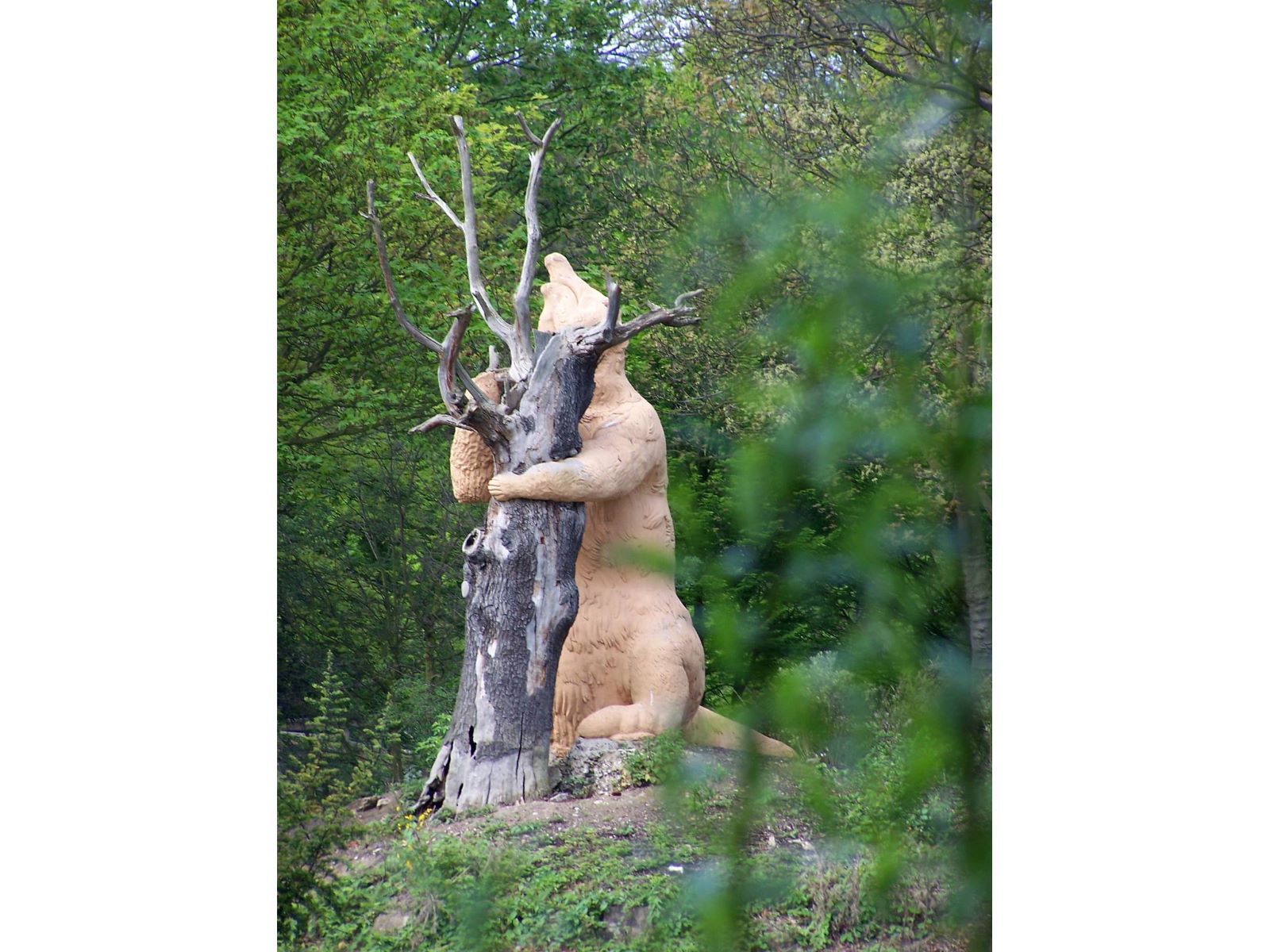 The giant ground sloth probably became extinct due to a combination of human hunting and changes in climate at the end of the last Ice Age.

Fun fact: The Crystal Palace Megatherium statue once lost its left arm after the tree supporting the model grew too wide and the limb snapped off.

The Crystal Palace statues vs modern scientific reconstructions: Megatherium only became extinct relatively recently so intact skeletons were available to base the reconstructions on, including fossils collected by Charles Darwin during his famous voyage aboard the HMS Beagle.

The research history of Megatherium americanum began nearly six decades before the sculptor, Benjamin Waterhouse Hawkins, commenced work on his model. Yet despite this long research lead, Hawkins’ standing, tree-grasping Megatherium was ultra-progressive for the time, one of the first depictions in a pose that chimes with our modern understanding of giant sloth habits, and actually pre-dating publication of ideas that it was capable of such feats. Prior to this it had been mostly depicted as a flat-footed, trunked quadruped.

Studies on another giant sloth, Mylodon darwinii, helped elucidate many aspects of lifestyle and anatomy that would inform Hawkins’ model. Mylodon, for instance, demonstrated that giant sloths walked on the sides of their feet and the shorter, clawless fingers of their hands. Exactly how they lived remained a matter of conjecture however, and ideas such as burrowing and tree-climbing were still being discussed into the 1850s.

The Crystal Palace Megatherium is of further note for being one of the oldest restorations of a ground sloth beyond simply a skeleton and is still well regarded as a portrayal of ground sloth form. The model correctly depicts its large, muscular proportions, long shaggy hair, slender shoulders sloping down to wide pelvis, inturned feet, standing upright on its ‘tripod’ of two hind legs and tail, and arms grasping the tree to access vegetation or push it over. Note that it would probably still have walked on four legs, if not all the time.

There are just two major difference between Hawkins’ Megatherium and modern reconstructions. The Crystal Palace model was restored with a short proboscis (trunk) on its face, which would have pleased Victorian scientists, but today it is thought that they would have lacked this feature, despite extensive nasal cartilage and prominent lip tissues.

The second anomaly is more of a mystery: the hands are oddly small, lack claws and are relatively poorly shaped, resembling giant ‘paws’. Although the left hand did break off due to the growing tree, it was seemingly replaced by an exact replica.  However, more curious is that Hawkins’ illustrations of Megatherium from the 1850s and 60s (including artwork associated with Crystal Palace) show appropriately large, clawed hands, and an illustration of the model being constructed in 1853 shows it grasping a tree with large, robust extremities. Hawkins was clearly in full knowledge of giant ground sloth anatomy when he built the model, including the hands, so it is very odd that the model’s are so inaccurate. We therefore suspect that there’s a missing chapter in the history of this model.