The Transatlantic Connection: Dinosaurs after the Crystal Palace 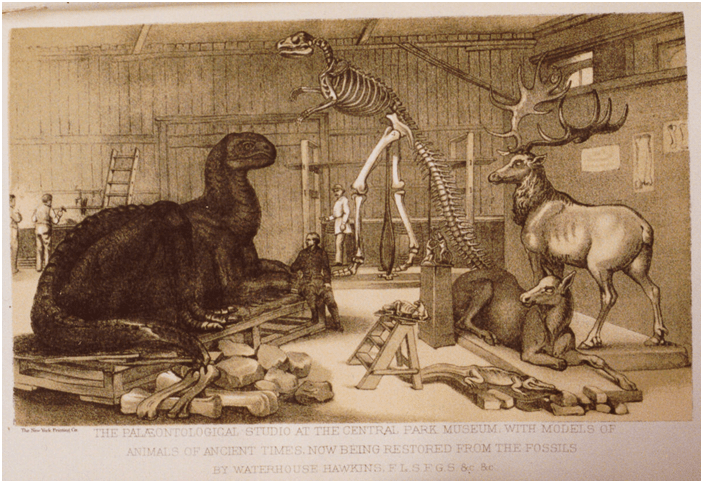 Britain was the birthplace of the dinosaur. The first ‘fossilists’ making major collections of dinosaur bones were renowned British geologists and zoologists and the taxonomic group was given its name, Dinosauria, and thus its conceptual framing, by Richard Owen in 1842. From the 1820s to the 1850s, while many of these bones were being discovered, a great tradition of popular writing by British palaeontologists such as William Buckland, Gideon Mantell, and Hugh Miller vividly brought the prehistoric world to the public in romantic and evocative books. Dinosaurs were ‘given flesh’ in the first attempt at three-dimensional life-like reconstructions when they formed the centrepieces of Benjamin Waterhouse Hawkins’s inspired Crystal Palace geological islands. Yet, by the 1890s, they had become better known from elsewhere—sometimes Belgium and most definitely from America. This is an overview of how dinosaurs evolved in popular culture on both sides of the Atlantic after the great discoveries of the late nineteenth century.

Although the Crystal Palace Dinosaurs were convincingly lifelike for the Victorian public, the dethroning of Hawkins’s models as accurate reconstructions was brutally swift. Excavations in New Jersey just four years after the Crystal Palace’s opening suggested to American savant Joseph Leidy (“the last man who knew everything”) that dinosaurs may have been bipedal, in contrast with Hawkins’s elephantine and crocodilian Iguanodons. Even worse for the enduring concrete creations that had been interpreted from disparate bones, complete skeletons of Iguanodon itself were discovered in 1878 in a coal mine at Bernissart, Belgium, confirming the obsolescence of the Crystal Palace attempts once and for all.

Nonetheless it was Hawkins himself who took the lead role in introducing Americans to the discoveries from New Jersey when he moved to the United States in 1868. He did this by constructing the first-ever mounted dinosaur skeleton of the famous Hadrosaurus in Philadelphia, made in collaboration with Leidy, by an extensive East Coast lecture circuit, and by a series of evocative mural paintings at the College of New Jersey (now Princeton University). Less successfully, his ambitious ‘Palæozoic Museum’ in Central Park, New York City, was vandalised by political gangsters in 1871 before it could be completed. Had it survived, this was to have been a grand American equivalent to the geological islands at the Crystal Palace. 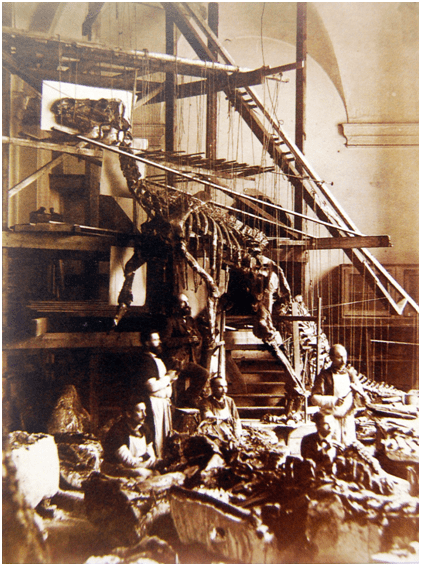 Figure 1. The mounting of a Brussels Iguanodon bernissartensis in 1882 (Wikicommons)

Meanwhile, in the American Wild West, palaeontologists E. D. Cope and O. C. Marsh fought a brutal fieldwork and publication battle to discover and name as many new species of gigantic prehistoric life as they could. In the process they unearthed dinosaurs even bigger and stranger than any found in Britain: amongst them were the frilled Triceratops, long-necked Brontosaurus, and armour-plated Stegosaurus. Significantly, many of these skeletons were substantially complete—a great contrast with the fragmentary bones that the Crystal Palace dinosaurs were based on.

Although British writers brought word of the existence of dinosaurs to the world, all three of the founding popularising palaeontologists were dead before the discovery of Hadrosaurus. Only a limited number of popularisers continued to bring news of the changing science to the lay reader and by the 1890s even the leading books of popular palaeontology were severely outdated—especially those in English. The secrecy, pedantry, and competitiveness of Cope and Marsh in the US meant that they had little time or inclination to popularise their discoveries outside palaeontological circles, and few other writers picked up the challenge for several decades.

Figure 2. Hawkins during the construction of his ill-fated Palæozoic Museum in New York, featuring both his model restoration and model skeletal reconstruction of Hadrosaurus (Wikicommons)

However, at the end of the century, after Hawkins had brought fame to the Hadrosaurus of New Jersey, another English populariser saw the potential interest—and income—in the newest American dinosaurs, along with the strange new species of mammal. The man who brought the newest dinosaurs to hungry readers was a non-practicing clergyman recently moved to London: Henry Neville Hutchinson. Not long after deciding to take up science writing professionally, Hutchinson produced Extinct Monsters (1892), a charming exposition of the palaeontology of recent decades and filled with exciting yet scrupulously accurate imagery. This ‘antique world’, Hutchinson argued, was ‘quite as strange as the fairy-land of Grimm or Lewis Carroll’.[1]

Hutchinson worked zealously with his artist Joseph Smit and the staff at the British Natural History Museum, London,to ensure that his popular book held nothing but the latest information. Extinct Monsters and its sequel, Creatures of Other Days (1894), were published to great success. In America, readers found that the great dinosaurian discoveries of the Wild West were being unveiled to them, not by a native palaeontologist, but by a British clergyman.

It was only at this time, in the mid-1890s, when the word ‘dinosaur’, rather than ‘saurian’, slowly started to gain popular currency. After Hutchinson’s worthy text, various palaeontologists employed at major museums caught on to the appeal of these entertaining publications. Amongst the most notable successors to Extinct Monsters were F. A. Lucas of the Smithsonian’s Animals of the Past (1901), E. Ray Lankester of the London Natural History Museum’s Extinct Animals (1905), and W. D. Matthew of the American Museum’s Dinosaurs (1915).

Surely the strangest attempt at popular palaeontology was Henry R. Knipe’s Nebula to Man (1905). Inspired by Hutchinson to produce his own work, the Tunbridge Wells geologist and eminent citizen turned the history of evolution into a rhyming epic poem. Reviewers of the expensive tome preferred to focus on the sophisticated illustrations by talented artists, including Alice Bolingbroke Woodward, rather than the embarrassing poetry: ‘Here lumbers Stegosaurus on his fours, / With high-arched back, a king of dinosaurs. / Big is his bulk, with solid bones secure, / And great his length, a score of feet and more’.[2]

Especially thanks to shamelessly sensational headlines such as the New York Journal and Advertiser’s 1898 description of the so-called Brontosaurus giganteus as the ‘Most Colossal Animal Ever on Earth’, dinosaurs began to flood into fiction, much of which was by British writers in the cheap and entertaining periodicals of the day. Frank Savile’s serial novel Beyond the Great South Wall (1899), for example, told the tale of an exploration team that discovered a murderous Brontosaurus at the South Pole, and Henry Francis’s short story ‘The Last Haunt of the Dinosaur’ (1908) depicted the hunting of a South African Megalosaurus. The most famous of these often lurid stories was, of course, to be Arthur Conan Doyle’s The Lost World (1912).

Finally, and crucially, at the turn of the century mounted and freestanding dinosaur skeletons were becoming museum staples. The galleries of the British Museum (Natural History) acquired a cast of the Belgian Iguanodon in 1895, as well as a slightly discombobulated Cetiosaurus from Peterborough in 1903, but it was the Diplodocus of 1905 that would become iconic. A gift from Scottish-American industrialist Andrew Carnegie, the cast of the sizeable sauropod was the latest and greatest in the long—if uneven—line of transatlantic partnerships that had been bringing the newest dinosaurs to the people ever since the Crystal Palace models made their brief stand at the cutting-edge of dinosaur science.

Figure 5. Composite photograph of the Cetiosauriscus stewarti skeleton (then called ‘Cetiosaurus leedsi’) that arrived in the galleries of the British Museum (Natural History) in 1903 (Wikicommons)

Bramwell, Valerie, and Robert M. Peck, All in the Bones: A Biography of Benjamin Waterhouse Hawkins (Philadelphia: The Academy of Natural Sciences of Philadelphia, 2008)

Debus, Allen A., Prehistoric Monsters: The Real and Imagined Creatures of the Past That We Love to Fear (Jefferson, NC: McFarland & Company, 2010)

——, Extinct Monsters: A Popular Account of Some of the Larger Forms of Ancient Animal Life, rev. edn. (London: Chapman & Hall, 1893)

Savile, Frank, Beyond the Great South Wall: Being Some Surprising Details of the Voyage of the S.Y. Racoon (London: Sampson Low, Marston and Company, 1899)