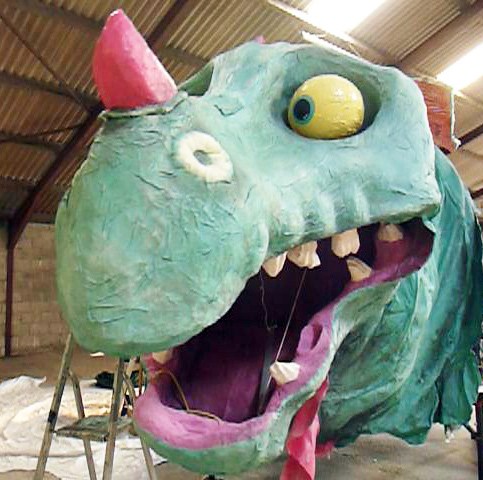 A number of the Friends (and friends of the Friends!) will be in Lyme Regis for the annual Fossil Festival from Friday 29 April–Sunday 1 May.

We will mostly be found in the Cobb Gate car park for the debut of Iggy the Iguanodon restaurant. Brought to life by Emerald Ant, this exciting and informative show recreates the infamous ‘dinner in the iguanodon’ on New Year’s Eve 1853. Public performances will be at 11am, 2pm and 3.30pm on Saturday and Sunday. Iggy will be touring the country at a later point in 2016 – watch this space for more info!

Dinner in the mould of the Iguanodon

At 8pm, chair of the Friends Dr Ellinor Michel, with Emerald Ant’s Sarah Butterworth, will talk on ‘Dinner in the Iguanodon and other Participatory Palaeo Thrills: sparking engagement with the Crystal Palace dinosaurs, the first extinct animals brought “to life”’.

These both take place in the Masonic Hall for £3 each. Tickets are available from Lyme Regis Tourist Information Centre or call 01297 442138.

In addition, the Friends will be around all weekend selling merchandise, fundraising, and are available to chat about all things dinosaur – see you there!