How were the Crystal Palace Dinosaurs made? 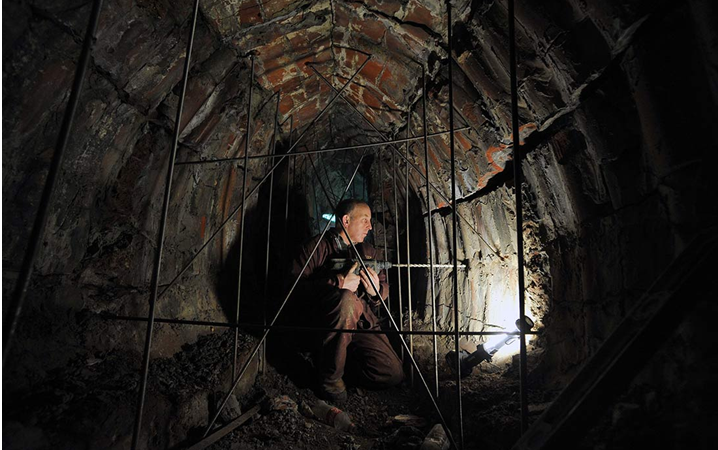 Benjamin Waterhouse Hawkins’s magnificent creatures were clearly a time consuming and labour intensive project, but it’s not obvious exactly how they were made by looking at them. We’ve been lucky enough to get up close to the dinosaurs and you can actually look inside several of them to see that they’re made of a lot of different materials you might associate more with building houses than making sculptures.

In fact, to make just one iguanodon took:

So how exactly were the dinosaurs constructed using these materials?

Waterhouse Hawkins began the project with a period of research. He examined fossils and other material at the British Museum, the Royal College of Surgeons and the Geological Society and started to create a series of detailed sketches. From these he then made a series of clay models around 1/6th or 1/12thof the final size to explore how to give the forms a realistic look. Although he is supposed to have discussed these with the anatomist and palaeontologist Sir Richard Owen to ensure they were accurate according to theories and common knowledge of the time, it is uncertain how much input Owen had in developing the models. We do know that Waterhouse Hawkins was regarded as the best natural history illustrator at the time, and an expert at bringing animals ‘to life’ from limited information. It is certain that his interpretation and artistry was the major determinant in the forms of the Crystal Palace Dinosaurs.

Once alterations had been made and agreed, work on the final models could begin. This long process started with the creation of full sized clay models with internal wooden supports. Waterhouse Hawkins had a team of workmen who would make the structure and shape of each animal before he himself added the final details. Once he was happy with each creature, the team were then ready to create the mould from which the final external details would be cast.

Etching showing the mould being created from the full size clay model of the iguanodon from Illustrated London News, Dec 31 1853

A mould was created from each clay model using plaster. These would have been made in sections that slotted together and in the process the clay model would probably have been destroyed and the materials reused. These moulds were then used to create large cement sections which would later be pieced together to form the outer skin of the dinosaurs which we can see today. Some smaller sections such as tails or smaller creatures were cast as solid sections, whereas the larger sections of the bodies are hollow.

All of this had been done in Waterhouse Hawkins’s workshop, but now they were ready to begin installation onsite. When the large cast sections were ready to be used, they were taken to their new home by sledge.

‘Models of Extinct Animals’, 1855 by Philip Henry Delamotte. Photographic print showing the dinosaurs in construction. Delamotte was commissioned to document the re-erection of the Crystal Palace at Sydenham as well as the installation of the Dinosaurs and their habitat in the surrounding park. Note that the sculptures were constructed on their platforms before the lake was dug and flooded, and before any vegetation was planted

The different sculptures were put together using various methods; this variation is due in part to the different sizes of the animals, but also reflected the financial constraints Waterhouse Hawkins faced nearing the end of the project. The largest sculptures, such as the iguanodons, are hollow and have a brickwork structure with a metal framework inside which Waterhouse Hawkins compared to a ‘house upon four columns’[ii]. To make these rectangular ‘houses’ more dinosaur-shaped, tiling and iron hooping were used. The cast sections were then attached to this using a strong mortar and any gaps were filled with rubble and concrete. 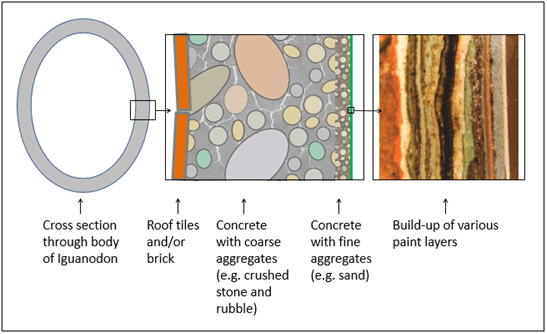 Schematic cross section of materials used in creating the Iguanodon. The paint layers are a sample from a paint analysis on the CP Dinos by Taylor Pierce in 2001, and show how many layers have built up over the years through maintenance and restoration work. (credit: Liesa Brierley)

At this stage, the dinosaurs were ready for the final details to be added. Mortar was used to fill any gaps between the cast sections and to sculpt any lost details. The teeth were cast from lead and had pins which slotted into holes made in the dinosaur’s gums and were fixed with mortar.

Finally, the sculptures were ready for their paintwork. They were first primed with a protective layer of paint to try to prevent damage from the elements – this paint was bright red, causing a joke among locals that Hawkins had had to feed the dinosaurs carrots due to the lack of vegetation over the winter![iii] This bright red was then covered in a layer of white so that they were ready for their final colour. Finally, the creatures were brought to life with the colours thought most accurate at the time. The dinosaurs were ready to roam the Crystal Palace Park and to inspire and educate the public.

Waterhouse Hawkins, B., 1854. On Visual Education as Applied to Geology, Illustrated by Diagrams and Models of the Geological Restorations at the Crystal Palace. Journal of the Society of Arts 2(78) p447

Waterhouse Hawkins, B., 1854. On Visual Education as Applied to Geology, Illustrated By Diagrams and Models of the Geological Restorations at the Crystal Palace. Journal of the Society of Arts 2(78) 443-449