Dinner in the Iguanodon

The “Dinner in the Iguanodon Model” is the best known story about Crystal Palace Dinosaurs. It took place on New Year’s Eve 31 December 1853 and was immortalised in the picture published in Illustrated London News, 7 January 1854, p. 22.

“Mr Waterhouse Hawkins requests the honour of—at dinner in the mould of the Iguanodon at the Crystal Palace on Saturday evening December the 31st at five o’clock 1853 An answer will oblige.”

The scene depicts a collection of gentlemen sitting around a table inside one of the Iguanodon models under construction over the winter 1853-54. In the image, waiters deliver dinner. On the floor are pieces of the mould used to cast the model. Different reports put Richard Owen at the head of the table and Benjamin Waterhouse Hawkins standing centre and facing the viewer. The model is surrounded by a tent decorated with a chandelier and four plaques honouring famous palaeontologists (William Buckland, Georges Cuvier, Richard Owen, Gideon Mantell). Because the Iguanodon model stood tall, a stage was required for waiters and guests to reach inside.

The famous “Dinner in the Iguanodon Model” was immortalised in this picture, published in Illustrated London News, 7 January 1854, p. 22.

This picture in Illustrated London News was based on a drawing made by Benjamin Waterhouse Hawkins, preserved in the Academy of Natural Science of Drexel University. This drawing was meant to be a report to the geologist Joseph Prestwich, but Waterhouse Hawkins intended it for wider circulation. At the time, much was made of the fact that Professor Richard Owen was placed at the head of the table - quite literally, sitting where the brain was located.

Waterhouse Hawkins’ drawing was accompanied by a small report.

THE DINNER IN THE MOULD OF THE IGUANODON

Given by Mr. B Waterhouse Hawkins

To Prof R Owen, Prof Edward Forbes, Mr Joseph Prestwich and 18 other Scientific and literary gentlemen at the Crystal Palace, Sydenham on the 31st of December 1853

The Restoration of the lguanodon was one of the largest and earliest completed of Mr Waterhouse Hawkins’ gigantic models measuring thirty feet from the nose to the end of the tail, of that quantity the body with the neck contained about fifteen feet which when the pieces of the mould that formed the ridge of the back were removed the body presented the appearance of a wide open Boot with on enclosed arch seven feet high at both ends. The arch in the head of the animal was occupied by Prof R Owen the celebrated Palaeontologist who with Prof Edward Forbes liberally aided Mr Waterhouse Hawkins with counsel and scientific criticism during the whole time occupied by his unique, arduous and successful undertaking. The wider arch at the opposite end was filled by Mr Francis Fuller the Managing Director of the Crystal Palace with Prof Edward Forbes on his right and a musical friend on his left whose delightful singing greatly increased the pleasure of a memorable evening. The two sides contain nine seats each that in centre of left was occupied by Mr Hawkins as host and Chairman, was supported on his right by Mr Joseph Prestwich one of his earliest pupils & constant friend during the previous twenty five years. Mr John Gould FRS was on his left.

Some things we know

Because this event has such a special place in legends about Crystal Palace Dinosaurs, some people seek absolutely precise knowledge of events over the night. This is quite difficult to do. Evidence is sparse. Different pieces suggest different answers.

We know who was invited. That information comes from preserved copies of the invitation. Benjamin Waterhouse Hawkins was the host. Guests included Richard Owen, Edward Forbes, John Gould and Joseph Prestwich. It also included some key people in the Crystal Palace Company, owners of the park. The promotional value of this event was not ignored, so some newspaper editors were invited, too.

Different versions of the invitation survive. Waterhouse Hawkins frequently drew images that were far too elaborate for his engravers to reproduce. This was true for these invitations. His hand-drawn version shows an exaggerated scale for the Iguanodon, though it suggests a key feature of the evening. 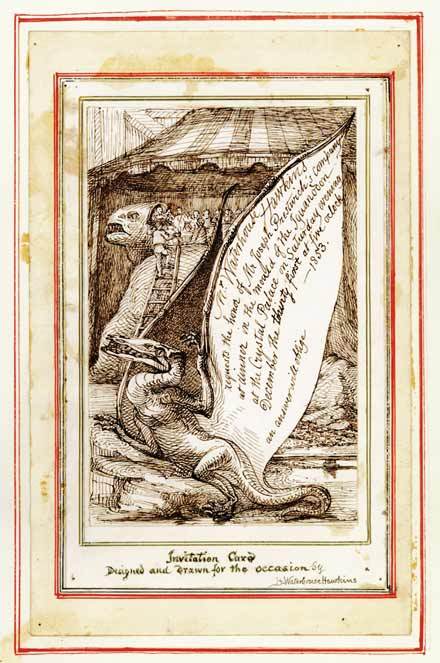 We know the menu for their eight-course dinner. This comes from preserved copies of the menu card.

We  know how they behaved, if press reports are to be believed. The event became quite boisterous. Waterhouse Hawkins said the proceedings lasted well past midnight.

Many newspapers reported the event in the following days. All press accounts followed the tongue-in-cheek spirit of holiday celebrations. For example, Punch reported “Fun in a Fossil” (1854 volume 26 page 24),

“The world of scientific gastronomy will learn with interest that Professors Owen and Forbes, with a party of other gentlemen, numbering altogether 21, had an exceedingly good dinner, the other day, in the interior of the Iguanodon modelled at the Crystal Palace at Sydenham. We congratulate the company on the era in which they live; for it it had been an early geological period, they might perhaps have occupied the Iguanodon’s inside without having any dinner there.”

And the London Quarterly Review’s report spoke in terms of domination:

“Saurians, Pterodactyls all! . . . Dreamed ye ever . . . of a race to come dwelling above your tombs and dining on your ghosts.” (need to confirm this quote)

What we don’t know

There are things we don’t know about this famous dinner.

For instance, did the guests sit inside the model (the Iguanodon we see when visiting the park), or did they sit in the mould for the model (the outer casing used to give shape to the model), or did they sit in both, perhaps while the concrete model was setting inside the mould (notice the smooth surface on the body of the Iguanodon versus the texture of the head and on the inner side of the piece of mould). It’s also possible they did not truly dine inside the model as depicted. Perhaps they dined near the model, and variously sat inside it as the evening progressed.

One report reports “Eleven guests could sit inside the belly; ten more places were prepared on a table alongside.” Close inspection of the Illustrated London News image suggesst a perpendicular table moving off into the distance behind the Iguanodon. This T-shaped setting seems plausible given the construction of a stage around the model. It is the most likely arrangement for the guests at that dinner.

In its accompanying report on the dinner, Illustrated London News implies Waterhouse Hawkins wants his scientist guests inside the body of his model as a symbol of their tacit support for the accuracy of his work. Owen obliged him with a short complimentary presentation about the sculptures. They were state-of-the-art, Owen said.

Another question we don’t have a specific answer for relates to where the Iguanodon statue stood on the evening of the dinner. Some suggest it stood in the studio shed used by Waterhouse Hawkins. This was located off the islands, on a nearby hill. This suggestion is based on the illustration appearing in Illustrated London News on the afternoon of the famous dinner.

Others suggest it was on site, where the Iguanodon is located today.

This rare photograph by Philip Henry Delamotte (published in 1855 but taken in 1854 prior to the opening of the park) gives a clue to the techniques used by Waterhouse Hawkins. The big statues weighted many tons and most likely were cast in place or were assembled in place from pieces cast in the studio. (Under canvas in this photograph are the Megalosaurus and Hylaeosaurus. In the distance, teleosaurs are complete.) This suggests the New Year’s Even dinner took place on site, with a stage constructed around the Iguanodon.