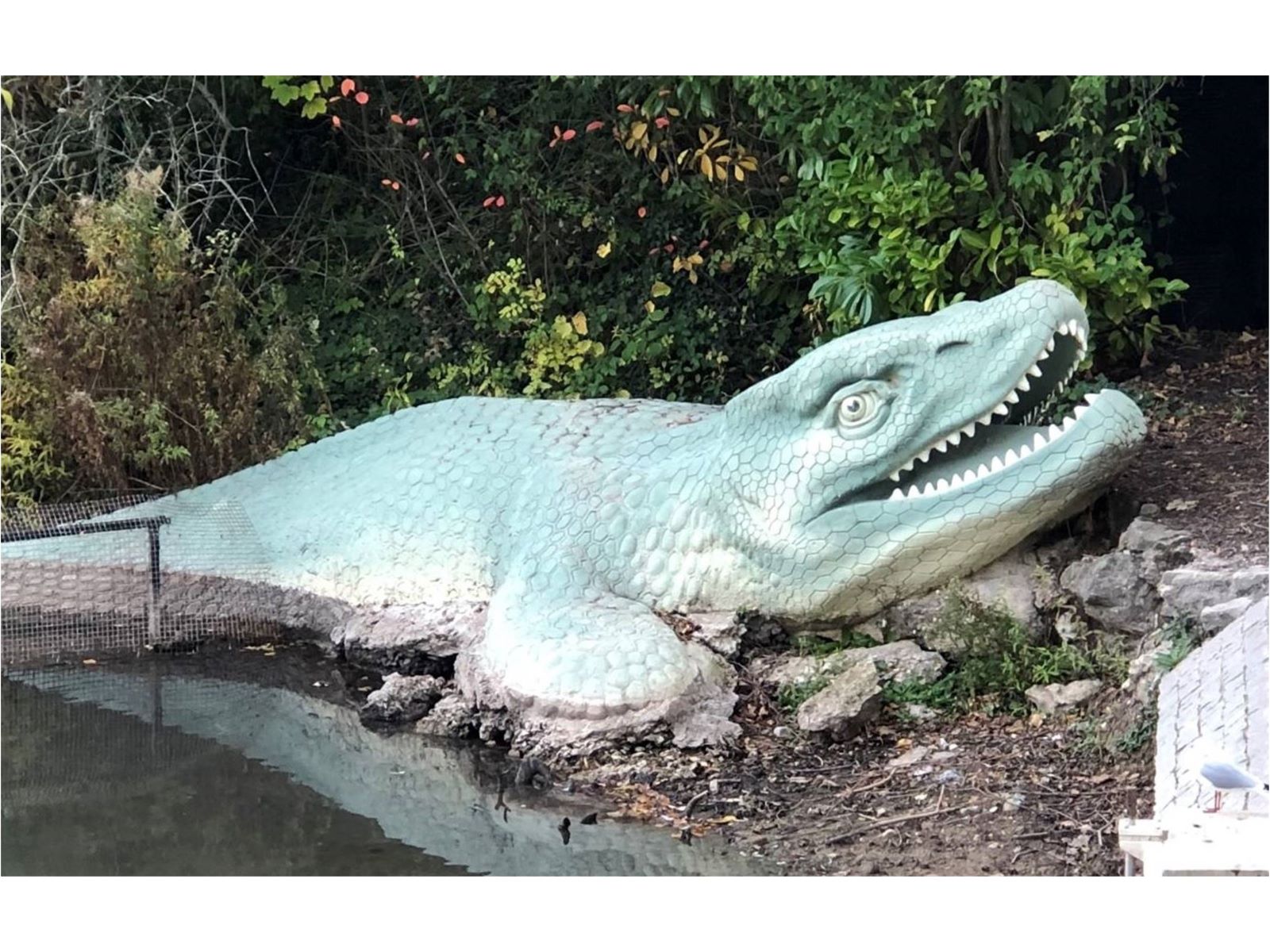 The full scientific name of the species depicted is Mosasaurus hoffmanni.

Diet: Turtles, birds, fish, other mosasaurs. It was a top sea predator in its day and might have swallowed prey whole.

Statues: Partial restoration of a single individual lurking in the water on the far side of the large dinosaur island near the pterosaurs.

Fun fact: Mosasaurus is the giant aquatic carnivorous lizard depicted in the film Jurassic World (2015), where in one particularly famous scene it is shown leaping out of the water to take the great white shark suspended above the water. They took some artistic liberty in portraying it as significantly larger than fossils suggest.

The Crystal Palace statues vs modern scientific reconstructions: The Mosasaurus is the only deliberately incomplete restoration in the entire Geological Court, comprising just a head and neck, a nondescript back, and a single flipper. This is sometimes attributed to its sculptor (Benjamin Waterhouse Hawkins) not having enough anatomical information, as the skull was the only fossil material available at the time.

On the other hand, he was happy to boldly interpret the anatomy of other species based on only partial fossils, for example his Dicynodon, which he reconstructed in full despite only being known from skulls at the time. Maybe other factors - perhaps time and money - have influenced the execution of this model? We know that the models were not ready for the opening of Crystal Palace Park in 1854, so it’s not inconceivable that Hawkins might have been looking to cut corners somewhere.

The head of the Mosasaurus is wide and boxy, consistent with the anatomist Richard Owen’s interpretation of the fossil skull dimensions being 2.5 x 5 feet. As with “Labyrinthodon”, Hawkins accurately captured the teeth of Mosasaurus. He also seems to have been on the right track by modelling the soft-tissues on monitor lizards, as these were realised to be close relatives of mosasaurs as early as 1800. The models have extensive lips, fleshy tissues around the eye socket, and side-facing nostrils positioned far back on its nose.

However, today we understand mosasaurs as being fully committed to a marine existence: the lizard equivalent of toothed whales. Among their many marine adaptations were shark-like tail fins, streamlined paddles and smooth skin formed of tiny scales.

Hindsight also shows there were some aspects of the Crystal Palace sculpture that could have been more precise, even at the time. In 1845 German zoologist Georg August Goldfuß described a near complete and undistorted skull of “Mosasaurus maximiliani” (now M. missouriensis) from the midwestern United States. This skull showed a narrower profile, and also that the nostrils were on the top rather than the side of the skull. Although this information was available at the time of the model’s reconstruction in 1854, Goldfuß’s Mosasaurus work was largely ignored for several decades by many scholars and failed to influence the Crystal Place models.

Below is a more up-to-date reconstruction incorporating some of these features.