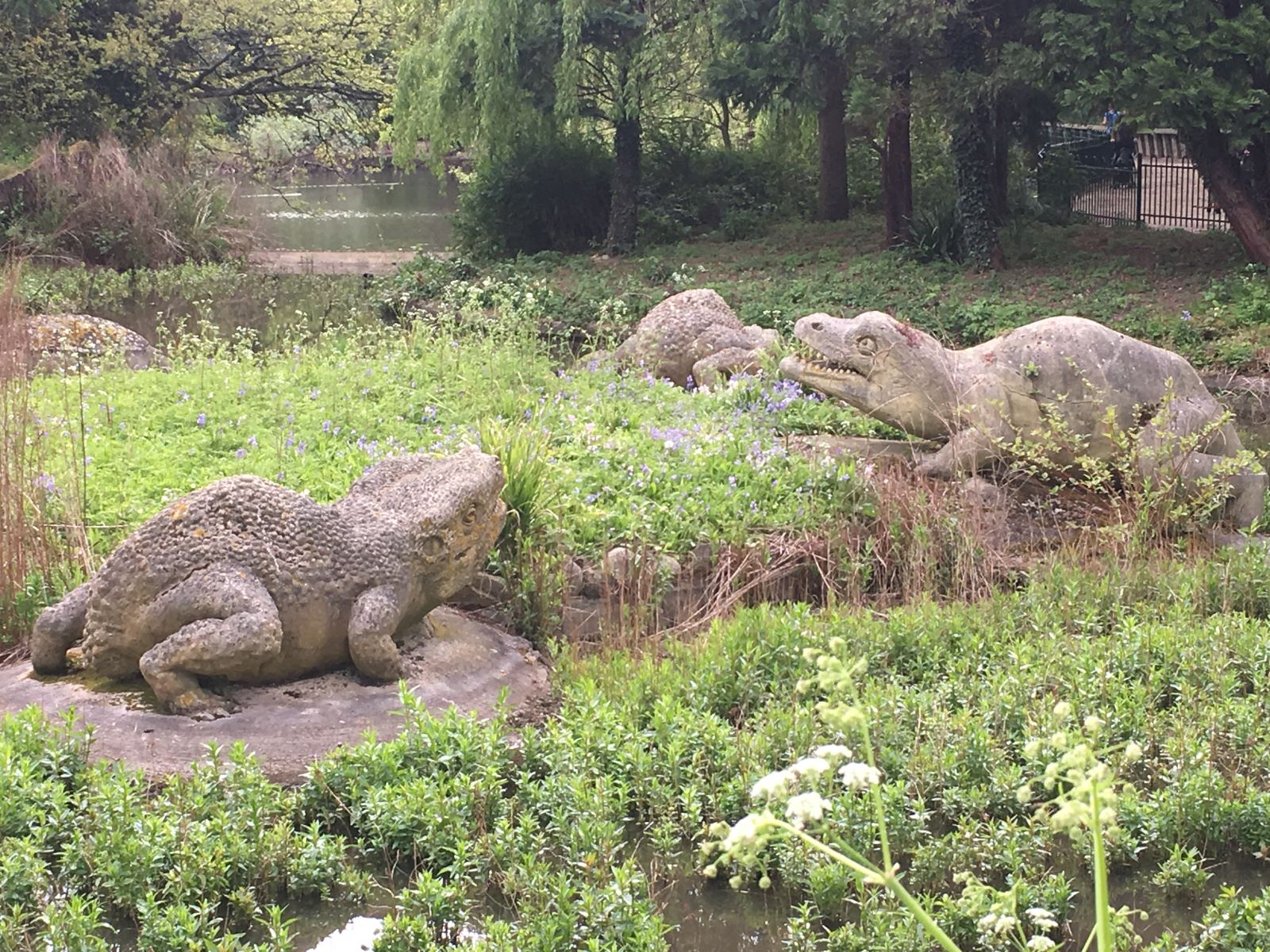 Scientific name: The species that the models are based on is now recognised scientifically as Mastodonsaurus, meaning “breast tooth lizard”.

The name “Labyrinthodon” was the nineteenth century anatomist Richard Owen’s attempt to replace Mastodonsaurus with a name he thought better suited the animal, but is no longer formally recognised. However, we do still use it informally to refer to the Crystal Palace models.

Mastodonsaurus is included within a group called ‘temnospondyls’ – giant tetrapods (four legged animals) that are thought to be primitive amphibians.

Common name: Labyrinthodon, meaning ‘maze tooth’ from the striking infolding of the enamel and dentine within the teeth.

Size: Up to 6 metres in length

Diet: It was probably an ambush predator in freshwater and fish have most commonly been found in their coprolites (fossil poo). However, smaller amphibian relatives have been found bearing their tooth marks and it probably also hunted some smaller land-dwelling animals.

Statues: The three individuals on the farthest island to the southwest of the site

Fun fact: In HG Wells’ novel Kipps the ‘great green and gold Labyrinthodon’ model at Crystal Palace is said to stare with an ‘inflexibly calm’ gaze.

The Crystal Palace statues vs modern scientific reconstructions: The anatomist Richard Owen described several species of Labyrinthodon from fragmentary fossil material from Warwickshire in the early nineteenth century. The Crystal Palace reconstructions were therefore attempts to rationalise several pieces of unrelated fossil data, so many details depicted in the models have since been revised.

In general they were portrayed as giant frog-like creatures, with a mix of smooth and warty skin. This detail was probably based on living amphibians and helped to distinguish between the different species that Owen described and that are represented: “L. pachygnathus” (smaller, warty skinned) and “L. salamandroides” (the larger, smooth-skinned model). The eyes are also set on the side of the head like a frog, even though the original fossils show they would have been on the top of the skull. On the other hand the visible teeth of the Labyrinthodon models do reflect close attention to the fossil material available at the time of their construction.

We now think Labyrinthodon (now Mastodonsaurus) is more like a salamander than a frog, though no living amphibian is a close analogue for this often giant Triassic form. It had a large, flattish head dominating a long, slender body with reduced limbs. The skull is covered with sculpted and textured bones somewhat reminiscent of crocodylians.

Mastondonsaurus probably also had a well-developed tail, not depicted in the frog-like Crystal Palace models. Although we’re still not sure exactly how large their tails were, it’s likely that it was largely confined to water and used powerful motions of its body and tail for swimming. We also lack evidence for details of its soft-tissue anatomy - skin type, the presence of fins etc. - but given how generally different they are from living amphibians it is not unreasonable to assume they wouldn’t be similar.

Scientific technical note on the species depicted: “L. salamandroides” has been subsumed into M. jageri, and the fossils referred to “L. pachygnathus”, though clearly mastodonsauroid in nature, are an aggregation of generically indeterminate material (Damiani 2001).

M. jageri is shown in the modern restoration below as striking at the rhynchosaur F. spenceri.

More info: Dr Simon Jackson has written in more detail about Labyrinthodon on our blog.